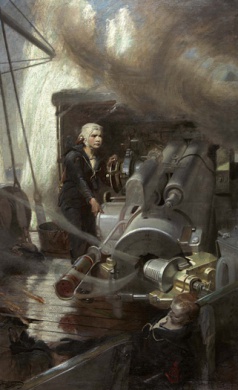 Price band for Standard Size (mounted/matted): £30-40. See below for detailed history of the painting

One of the defining images depicting an event in the Royal Navy’s long history, Boy John Travers Cornwell mortally wounded but standing by his post during the Battle of Jutland in 1916, this is a magnificent portrait by Frank Salisbury who was pre-eminent as a specialist of his day in portraits and large canvases of historical and ceremonial events.  In those days the word "hero" meant something very special - unlike today's loose and over exploited use of the word!

Sixteen year old  'Jack' Cornwell joined the RN in October 1915 and after basic training was drafted as Boy Seaman 1st Class in Spring 1916 to the light cruiser HMS CHESTER (Captain Robert Lawson RN) of the 3rd Light Cruiser Squadron.  Six weeks later CHESTER was heavily involved in the Battle of Jutland during which she sustained 35 killed or who subsequently died of wounds and a further 42 wounded. Amongst those not long to survive the action was one of the 5.5 inch guns’ sight setter, Boy Cornwell, who although mortally wounded early in the engagement and with the rest of his gun’s crew dead around him, had stayed at his post heroically waiting for orders “with just his own brave heart as protection” from the heavy shell damage CHESTER was continuing to receive. During a lull in the action he was carried below for treatment but his wounds were too severe and he subsequently died ashore some 48 hours later. In view of his exemplary conduct Captain Lawson recommended him to Admiral Beatty for a posthumous Victoria Cross. Beatty too was so impressed with the story of the youngster’s bravery that he unhesitatingly endorsed the recommendation and passed it up the line to the Commander-in-Chief, Admiral Jellicoe: a posthumous VC was announced in the London Gazette of 15 September 1916, Cornwell thus becoming the Navy’s youngest VC holder (he was not even 16 ½). Jack’s mother received the award from King George V at Buckingham Palace on 16th November 1919. For more detail on this action,  an etching by WL Wyllie of CHESTER under fire at Jutland (see MP019 on this website); and the larger battle in which CHESTER and Cornwell were involved, please see Maritime Originals (go to our Home Page), "The Battle of Jutland" by A B Cull.

One of the great society artists of his time, Salisbury’s fame can largely be traced back to this very portrait which was commissioned by the Admiralty and presented to the First Lord of the Admiralty in 1917. It immediately attracted the attention of the Royal family and the Establishment and dozens more commissions swiftly followed. During his subsequent career Salisbury painted no less than 25 members of the Royal family (he was the first to paint Queen Elizabeth II), several of Winston Churchill, and Richard Burton, Maria Montessori, Field Marshal Montgomery and Admiral of the Fleet Mountbatten, Mussolini, Jan Smuts, Sir Henry Wood, Andrew Carnegie all sat for him; and he painted 6 Presidents of the United States. In all he executed over forty large canvases (this one of Cornwell VC is 8 x 5 ft) of important historical and national events, and until shortly before his death in 1962 he was regarded as arguably the supreme living British artist in this field.

The original of this painting duly passed from the Admiralty in London to Seaman training establishments: HMS IMPREGNABLE in Devonport, HMS St VINCENT in Gosport and finally to HMS RALEIGH in Cornwall where it now hangs - newly cleaned and with its magnificent frame refurbished - in the chapel and where it continues to inspire youngsters setting out on their careers in the Royal Navy. It was reproduced by Maritime Prints at the request of the Commanding Officer of HMS RALEIGH and with the permission of the Estate of the late artist.