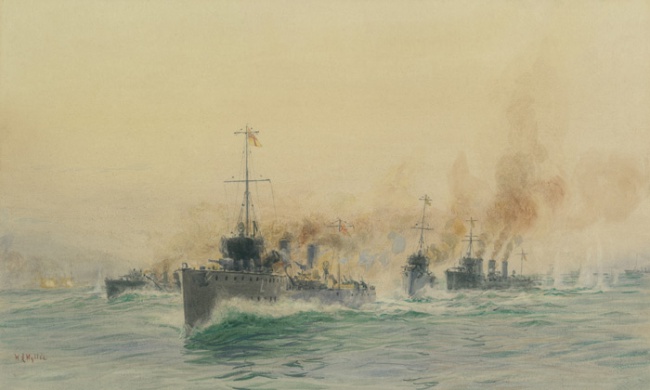 Provenance: with the Rembrandt Gallery. This watercolour features as colour plate no. 3 in “Sea Fights of the Great War” (Destroyers engaging the German cruiser MAINZ) by W L Wyllie RA and M F Wren (published by Cassell and Company Ltd, 1918).

Wyllie’s book describes how the Royal Navy had safely overseen the transportation of the British Expeditionary Force to France in early August 1914 (without, it should be said, the loss of a single life to enemy action). Commodore Roger Keyes (Commodore 8th Submarine Flotilla) had worked ceaselessly to contribute to this, his submarines keeping watch by day and night, without relief, on the entrances to the German rivers should the High Seas Fleet decide to venture out to interfere with the troop transports. This plan was then developed further and became an attempt to actually draw the German fleet out and into the waiting arms of Admiral Beatty’s battle cruisers who were at very short notice to sail and give battle. The ships painted here (L to R) are SMS MAINZ, HMS LIBERTY (Lt Cdr N K W Barttelot RN), HMS LAUREL (Cdr F F Rose RN) and HMS LYSANDER (Lt Cdr G W Taylor RN) hauling out to port ahead of HMS LAERTES (Lt Cdr M L Goldsmith RN).

There is no better way to set the scene painted here than to quote from Wyllie’s book page 21 (the illustration faces page 20). “Let us now follow Commodore Tyrwhitt. At 7.57 [on 28thAugust 1914] two German destroyers were sighted on the port bow, with several destroyers, and hot action commenced. My first picture [this one] represents the Fourth Division of the Third Flotilla which steaming in the mist suddenly became aware that the German cruiser MAINZ was lying right across their path. The enemy opened a very hot fire, and as the range was only a little over 3,000 yards the little craft soon found themselves in the midst of flying shells.. LAUREL [foreground] steamed away, a mass of smoke, her foremost funnel shattered and the midships gun platform knocked to piecesLIBERTY’s [just beyond LAUREL] commander was killed, her bridge damaged and her mast shot away. LAERTES [right hand ship], which stopped and fired a torpedo, was put out of action, her port boat being shattered and a hole knocked in her second funnel. The torpedo, however, hit MAINZ which soon began to show signs of the mauling she was receiving.”

The watercolour carries Wyllie’s pencil notes identifying each ship along the bottom but they are very feint: more visible is his pencil writing “Laertes firing a torpedo” which he has overpainted in red (as with his signature).