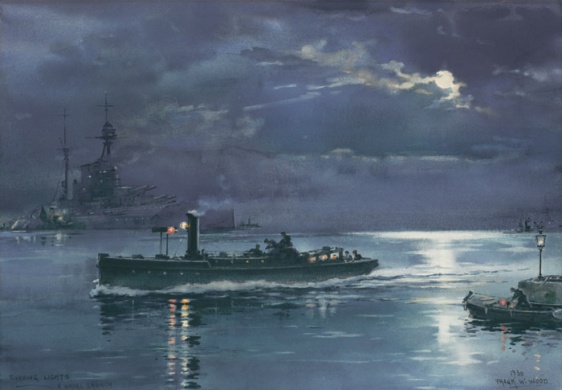 With a Queen Elizabeth Class battleship slowly underway only a few cables to starboard, the steam pinnace, her aft cabin full perhaps of cheerful run ashore returners, is whispering her way back to her parent ship. It seems as if the battleship’s drifter  maybe with mail and vital stores  is lying alongside amidships as she does her transfer; whilst further aft there appears to be additional activity  torches from the quarterdeck shine down onto another boat that has come alongside the slow moving battleship. The steam pinnace hurries on - none of her business.

Based on a standard hull length of 50 feet and weighing close to 16 tons, there were, of course, many variations of these fine seaworthy boats that were carried in capital ships and heavy cruisers. Invariably commanded by a midshipman (whose very life depended upon his faultless handling of this, his first command!) the crew would consist of a petty officer coxswain, an engine room artificer, a leading stoker and 4 able seamen. There was accommodation for up to 70 if required. The midshipman depended very heavily on the sound advice and polite admonishments offered by his vastly more experienced coxswain: the Mid took the occasional credit  if ever the Commander was feeling that generous; and he took the far more liberally dispensed stoppages of leave and canings when anything went wrong. That’s how it worked and it was a system well understood by the boat’s crew who had learned to respect the quaint way their junior officers were trained! They looked after him, gently guided him and he in turn put his heart into “his” boat and their well being.

These were truly wonderfully useful workhorses. Steam pinnaces notably saw action off the beaches of Gallipoli where, armed with a three pounder gun forrard and machine gun aft, they were used to tow heavy lighters and strings of boats loaded with men and stores into the beaches; and all too often the return trip’s cargo was wounded and dying men from those very beaches. Any pair of steam pinnaces were expected to be able to transform themselves into emergency minesweepers at short notice and some even laid the odd mine or two as well: more than a few midshipmen won a DSC for the vital and dangerous work they did under murderous fire off those beaches and in the narrows. And in the piping days of peace they made admirable admirals’ barges with their shining bell mouthed funnels, immaculate paintwork, gleaming brasswork and impeccably turned out crews.