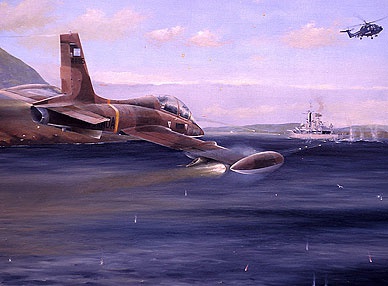 Lt Guillermo Owen Crippa, a young Argentine Fleet Air Arm pilot, was tasked as No 2 of an armed patrol from Stanley airfield shortly after sun-up. The other Aermacchi jet trainer became unserviceable, so Crippa launched on his own. Near Jersey Point he spotted a Royal Navy Lynx helicopter, but as he pulled up to dive on it, he also sighted the enemy’ invasion force anchored in San Carlos Water. Crippa broke off, reported his discovery of the British to his controller in Stanley  and then announced his intention to attack. At low level and high speed he emerged from the radar shadow of Fanning Head, and fired all his podded Zuni rockets at HMS ARGONAUT (Captain Christopher Layman LVO RN). Crippa then engaged a RFA stores ship with his 20 mm cannon, and before exiting the combat zone, took notes on the number and types of ship sheltering in San Carlos Water. He was subsequently awarded Argentina’s highest decoration for valour in combat. The British were also given a first taste of the courage and determination that characterizes Argentine military aviators.