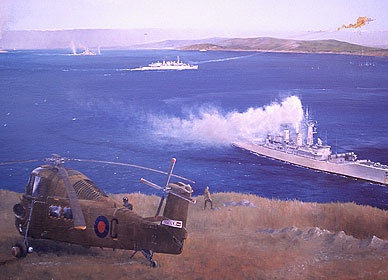 This painting depicts an instant during the Battle of Bomb Alley’ when the power of the Seawolf GWS 25 missile system was demonstrated to maximum effect, and witnessed by the crew of a Wessex 5 casualty evacuation helicopter that had been forced to land and shut down nearby. The aircraft’s passenger, Surg Cdr Rick Jolly of 3 Commando Brigade RM, can be seen looking down on the bomb-damaged and disabled HMS ARGONAUT lying to anchor beneath Fanning Head. In the middle distance is HMS BROADSWORD linked by a missile exhaust plume to the Argentine Air Force Dagger jet that had just bracketed HMS PLYMOUTH with its bombs. In the far distance, HMS ANTRIM struggles to control the damage inflicted on her by another Dagger attack. For the gallant Flt Lt Pedro Bean there was to be no escape as he headed for home: the missile impacted from astern, and his aircraft disintegrated in a ball of flame (see also other Falklands war paintings on this site by David Hardstaff)