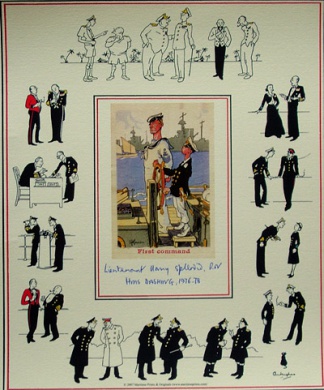 This was too tempting! A set of caricatures (produced by Commander A.M. Hughes OBE of the Gieves Silhouettes fame, probably in the 1920s) that used to adorn Messrs Gieves’ ("established 1785") announcement that their tailoring representative would be visiting such and such a wardroom on such and such a day.  The caption that went with it was: "The officers....of Her Majesty's Fleet and the Royal Marines shall wear such uniforms as the Admiralty in persuance of His Majesty's pleasure shall from time to time direct"   The wonderful little vignette of "First Command" placed in the centre seemed destined to be put together with the dress cartoons into a single picture!

The pink faced midshipman standing up on tippy toe to be able to look over the wheel of his first command, his steam pinnace; the kindly weatherbeaten face of the old and highly experienced coxswain, waiting in the wings ready to advise and show his young captain when he's in danger of getting it wrong and making an arse of himself; the serried lines of battlewagons massed in the dockyard behind, hoping not to be struck by an out of control pinnace......

This is one for the wives of the by now Very Senior and Important Officers who remember how their husbands once were: young, fresh faced, in command of their first ship and very biddable though NOT in command of their spouses!  Seniority, pomposity and a widening waistline had not yet become apparent.!

In the space below the centre picture we (or you if you prefer) will write in the inscription of your choice, such as:

or whatever inscription you like. You, (now Vice Admiral Sir Harry Splendid), feel that their Lordships showed great perspicacity by giving you that early command and you’d like the picture in a prominent place in the downstairs cloakroom. Your wife (notwithstanding the fun of being Lady Splendid) thinks that the old man really has become impossibly self important and needs bringing down a peg or three so she, too, would like it hanging in the same place to remind him of his place and that he was once a green,  young midshipman....!