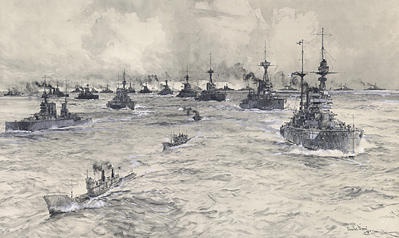 The Armistice which concluded the First World War had been signed 9 months earlier when a representative Fleet of some 50 ships and submarines under the command of Admiral Sir Charles Madden GCB KCMG CVO, Commander-in-Chief of the renamed Atlantic Fleet, came to anchor in the broad estuary of the River Thames off the seaside resort of Southend-on-Sea which lay within the geographical boundaries of the ancient Nore Command of the Royal Navy.

Charles Dixon’s painting shows Admiral Madden’s ships as they stood in from sea and shaped a course to the southwest in preparation for taking up their anchor berths off Southend. The vessels with the shallowest draft which would anchor furthest up the estuary and closest to London are proceeding through the lines of heavier ships which were to anchor further to seaward, to the east off Maplin Sands. Southend lies at the back of the painting to the far left, Shoeburyness at the back towards the centre. Towards the right of the painting is Admiral Madden’s flagship, HMS QUEEN ELIZABETH (Captain The Hon Matthew Best DSO* MVO RN); the battleship had served in home waters since 26 May 1916 when, on return from bombarding off the Dardanelles she had entered Rosyth Dockyard for well earned leave and maintenance. She was thus incarcerated when 4 days later her sisters and the rest of the seagoing Grand Fleet sailed for what would become known as the Battle of Jutland. When 6 months later Admiral Sir John Jellicoe struck his flag as C-in-C Grand Fleet in HMS IRON DUKE, it was to the truck of QUEEN ELIZABETH’s main that the Cross of St George, the flag of the new C-in-C, Admiral Sir David Beatty, was hoisted.

Leading the submarines of the 1st Flotilla and just out of the foreground to the left, is their parent ship HMS FEARLESS (Captain E W Leir DSO RN), Senior Officer 1st Submarine Flotilla in whose wake are following 3 submarines of the K Class believed to be HMS K2 (Lieutenant Commander T Kerr RN), K5 (Lieutenant Commander J F Hutchings RN) and K6 (Lieutenant Commander F C C Kennedy RN). From early in his second tenure of office as First Sea Lord, Admiral Jackie Fisher had been advocating big, fast submarines able to take their place in the line with the dreadnoughts; and the Director of Naval Construction, Sir Eustace Tennyson d’Eyncourt, had put forward a revolutionary design for a large 24 knot Fleet Submarine which, to achieve this phenomenal speed, would have to be powered by steam. Despite considerable opposition which held the view that submarines and steam and diving were totally incompatible, Fisher persisted and the design was eventually accepted and subsequently endorsed by a Submarine Committee consisting of Captain Roger Keyes CB CMG MVO DSO ADC RN of the battleship CENTURION, Captain Algernon Candy RN of BOADICEA and Commander Charles Little RN of FEARLESS. And so the K boats started to join the fleet from late 1916. Big powerful submarines with twin funnels, tall masts and a large bridge-like conning tower, 338 feet long, displacing some 2,500 tons, capable of 24 knots and with 4 inch and 3 inch guns, 8 x 18 inch torpedo tubes (4 bow, 4 beam) and a complement of 55, the 18 boats of the class looked more like large patrol craft than submarines. This, too, was how they were employed as they manoeuvred and sped between the battle fleet and its outlying cruiser squadrons. But their longitudinal stability was poor (their bows were subsequently modified to the bulbous shape shown in the painting in an attempt to rectify this shortcoming), and their profile on the surface was too low for safety  they were so easily overlooked by the giant dreadnoughts with whom they kept close and dangerous company. They were slow to dive and hard to control once down there: a major disaster was not long in coming. On 31 January 1918  12 months after K13 had sunk on acceptance trials in the Gareloch with the loss of 31 lives, and 18 months before this fleet gathering  K17 was rammed and sunk by FEARLESS off May Island in the Firth of Forth, and K4 was rammed and sunk by K6. In the ensuing melee of the night K14 was then hit by K22 who in turn was overrun by the battlecruisers and promptly hit by INFLEXIBLE rushing past together with her sister battlecruisers AUSTRALIA, NEW ZEALAND and INDOMITABLE. Over 100 lives were lost in what became known as the Battle of May Island and in the subsequent Court of Inquiry it was said that the K boats had the speed of destroyers but the turning circles of battleships and the bridge facilities of motor boats. Although they were capable of performing the function for which they had been designed and were outstanding engineering achievements for their day, they were not the success once hoped for, and the “Calamatous Ks”, together with their three 12 inch gunned, aircraft carrying half sisters of the M Class, did not make old bones. But the imagination and experimentation that they had encapsulated was typical of this new branch of the Royal Navy and so it is entirely appropriate that submarines occupy such a prominent position in this painting. The recent war during which 54 of our submarines had been lost (out of a total of 203), 14 VCs won and names such as Horton, Holbrook, Nasmith, Boyle, White, Sandford had brought fame to the Branch, submariners had seen their roles and capabilities expand beyond recognition. They had sunk 54 enemy warships and 274 other vessels and in all theatres of war HM Submarines had been bravely and imaginatively fought. Their losses had been high but their place in the Royal Navy was unquestionably assured.