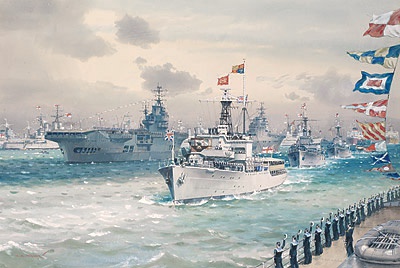 Price band: £130-155. A chart showing the layout of all the ships is included with this print.

At 3.00pm on Monday 15th June 1953 the Despatch Vessel HMS SURPRISE (Cdr R A M Hennessey DSC RN) wearing the Royal Standard and preceded by custom by THV PATRICIA, slipped from South Railway Jetty, HM Dockyard Portsmouth for the Solent; and at 3.30 pm to a thunderous gun salute from the ships at Spithead, she entered the review lines. There to greet the new Queen were 197 ships of the Royal Navy, 13 ships of Commonwealth navies, 16 ships of foreign navies, 51 merchant ships and auxiliaries and 4 RNLI lifeboats. The 9 lines of ships ranged from No Man’s Land Fort in the east to the River Medina in the west.

Although a Flag Officer Royal Yachts (V Adm E M C Abel-Smith CB CVO) had been appointed and was in attendance aboard SURPRISE, the new Royal Yacht was not yet completed  indeed she had been named BRITANNIA only 2 months earlier at her launch by the Queen. But as Charles Turner clearly shows in this fine painting, SURPRISE provided a very adequate substitute for a royal yacht and took up her temporary duty with style. Here we see her with the Queen and Prince Philip in the specially constructed podium on B gun deck, on the first leg of the Queen’s review, passing down between Lines F and G. Astern of SURPRISE are HMS REDPOLE (Cdr M J L Blake RN) acting as Admiralty Yacht, HMS STARLING (Lt Cdr N M Mules DSC RN), HMS FLEETWOOD (Lt Cdr D M Vaughan-Hughes RN), HMS HELMSDALE (Lt Cdr D D Macfarlan RN), the ocean liners SS PRETORIA CASTLE, SS ORCADES and SS STRATHNAVER; and local Portsmouth to Isle of Wight ferries, MV BRADING and MV SOUTHSEA.