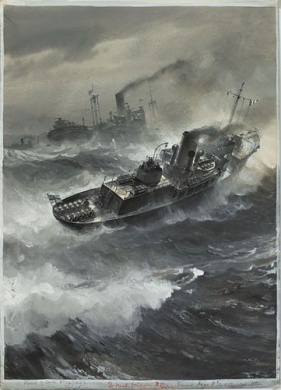 This Turner painting, showing a Flower Class corvette battling her way through a mountainous North Atlantic storm, carries along its lower margin the Admiralty censor’s approving signature and date, 25 June 1941. Placing this in context with the times, HMS HOOD had been sunk one month before on 24th May; and KM BISMARCK had finally succumbed to the British Home Fleet three days later, an event famously captured by the same C E Turner in his celebrated painting executed in just the same style as this one of the corvette. That painting by Turner (together with 6 others by him in the possession of the National Maritime Museum at Greenwich) was therefore probably executed at the same sort of time as this one which, from notes on the back cover, tell us it was based on sketches by a naval officer and was then published on page 47 of the Illustrated London News of 12 July 1941. The censor’s approval (”Passed by Censor no. 147442 June 25/41”) has been retained on the lower margin of the reproductions and may be mounted (matted) in or out as required. To quote EHH Archibald’s “The Dictionary of Sea Painters” (1980) Turner’s work “is well-crafted, highly finished and the naval details expertly observed”
Turner shows that despite the appalling weather, two hands are required to be closed up on the quarterdeck by the depth charge racks; and the after gun also appears to be manned: attacks were obviously imminent and the convoy, two members of which can be seen in the background lurching their way through the wild seas, must be guarded come what may