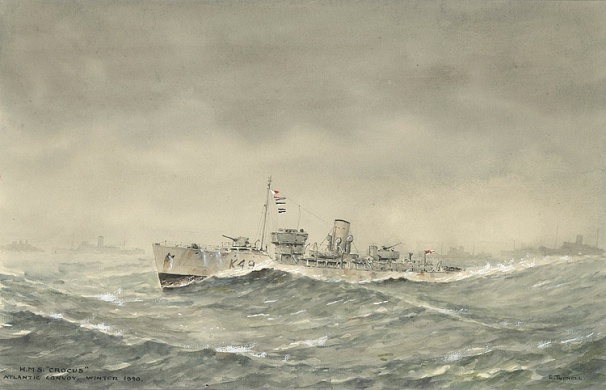 The Flower Class corvettes are seldom painted in anything other than a storm force 10 and with good reason: they were small ships battling a vast North Atlantic where the weather  in winter especially - was frequently quite appalling! And Tufnell’s watercolour appears to do the scene justice though we are probably looking at nothing more than a mere force 6 or 7 here. The record of service in the Royal Navy of this class of ship  and a huge number served with the Royal Canadian Navy too  is second to none and too well recounted to need re-telling here: this is a marvellous watercolour that does the elements, the doughty merchantmen and CROCUS full justice.

Provenance: from the private collection of the late Rear Admiral John Templeton-Cotill CB (who served aboard CROCUS in winter 1940 as a Temp Sub Lt RNVR)