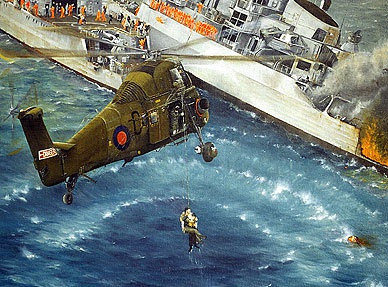 Wessex 5 XT449 of E Flight, 845 Sqn, was employed on casualty evacuation duties throughout the daylight hours, in the hands of Lt Cdr Mike Crabtree and his co-pilot, Lt Hector’ Heathcote. Their crewman was Cpl Kevin Gleeson RM. After a number of incidents, the aircraft was the first on scene shortly after HMS ARDENT had been bombed and set on fire in Grantham Sound. The helicopter crew spotted two injured survivors in the near-freezing water, but both men were weakened by exhaustion and injury. The first, AB John Dillon, was unable to grasp the rescue strop lowered to him, so the helicopter’s passenger (Surg Cdr Rick Jolly) volunteered to go down, and grabbed Dillon in a bear hug. Despite not being dressed in immersion clothing, the exhausted doctor then descended a second time, and hooked himself into CPO Ken Enticknap’s lifejacket. These rather unorthodox techniques proved successful, and both casualties were recovered to the liner SS CANBERRA.