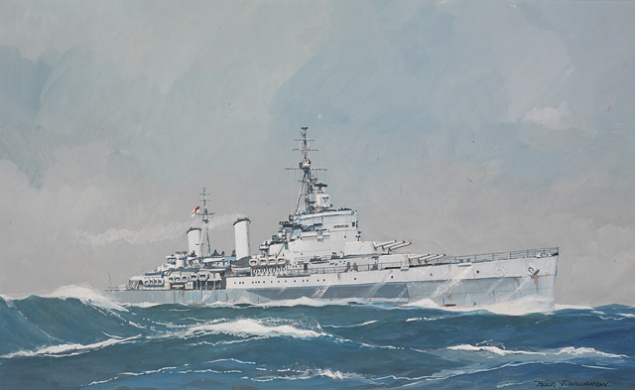 Limited Edition: 12 copies worldwide is planned once copyright is secured

This beautifully detailed painting shows the cruiser, recently returned to sea after her rebuild following mining in the Firth of Forth in 1939, under command of Captain F J Parham RN. The sky is pewter, the sea icy green and glimpses of heavily clad and muffled figures on the bridge and upper deck are all commensurate with this scene of BELFAST in her Arctic Convoy days when she was a stalwart in fighting through convoys of war supplies to Russia. Long, dangerous and wearying months in these northern latitudes with their sub zero temperatures and weather and sea states which were frequently appalling, were rewarded for BELFAST and other units of the Home Fleet when following a brilliant game of cat and mouse, they cornered and then sank the German battle cruiser SCHARNHORST on 26th December 1943 off North Cape.