HMS CHARYBDIS IN A CHANNEL GALE, 1943 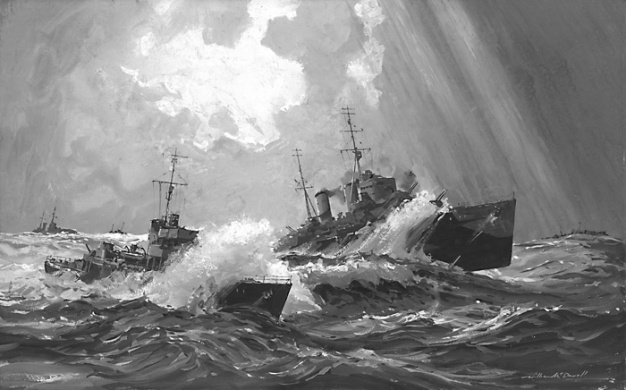 Well known for his striking illustrations of maritime scenes of World War II, many of which appeared in the Sphere magazine, McDowell has chosen here as the centre of his picture the Dido Class light cruiser HMS CHARYBDIS with a River Class corvette, HMS ITCHEN, a few cables out to starboard (both ships are identified on the back of the painting - in amongst other jottings in pen and pencil and Sphere stamps bearing “date of issue 2 Dec 1944” and “The Sphere No 2341” - as “CARYBDIS (sic) and ITCHEN”). Because of a  shortage of the correct gun turrets brought about by extreme pressure of wartime warship construction, CHARYBDIS and SCYLLA alone of the class had mounted, since completion, eight 4.5 inch guns (2 for'rard and 2 aft): all the others had 3 distinctively shaped 5.25 inch turrets forrard as well as a further 2 aft.

HMS CHARYBDIS (Captain L D Mackintosh DSC RN) had commissioned on 3rd December 1941. 22 hectic months of war in various theatres followed including shore bombardment in support of the Salerno landings when she had embarked the Supreme Allied Commander, General Eisenhower. Her six Battle Honours (Malta Convoys 1942, North Africa 1942, Salerno 1943, Atlantic 1943, English Channel 1943 and Biscay 1943) give an indication of just how busy she had been. On the 23 October and by now commanded by Captain G A W Voelcker RN, she was torpedoed in the vicinity of the Sept Isles off the north coast of Brittany with the loss of 460 officers and men. Shortly afterwards the bodies of 21 from the ship were washed up on the neighbouring island of Guernsey, one of the group of Channel Islands that had fallen to the Germans in 1940. Although the occupying Germans paid the dead men full military honours at their funerals some 5,000 Guernseymen also turned out to pay their respects to the dead and to show solidarity with Britain; and “Charybdis Weekend” is still observed on the island every year.