HMS COLLINGWOOD AT SEA IN 1915 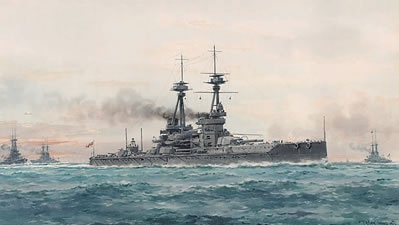 COLLINGWOOD (Captain J C Ley RN) was present at Jutland on 31 May 1916 as part of the 1st Battle Squadron commanded by Vice Admiral Sir Cecil Burney KCB KCMG, Second-in-Command of the Grand Fleet with his flag in MARLBOROUGH (Captain G P Ross RN). Transferring to the 4th Battle Squadron towards the end of the war COLLINGWOOD went into Reserve in Devonport in 1919 and for a while acted as gunnery training ship. But as with most warships of her generation the signing of the Washington Treaty on 6 February 1922 spelled her premature end and she was sold for scrap in December 1922. This watercolour, which belongs to the Royal Navy Trophy Store, now hangs in the shore training establishment COLLINGWOOD at Fareham, Hampshire, together with one of the old battleship’s Jutland battle ensigns, another one having been given to HRH Prince Albert (the future King George VI) who was serving in the battleship at Jutland.