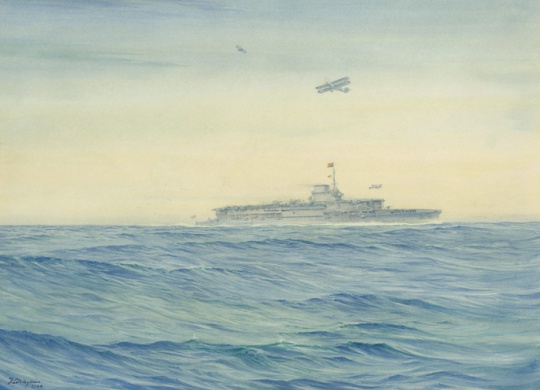 Built, together with FURIOUS and GLORIOUS, as fast cruisers at the whim of the First Sea Lord, Admiral Fisher who was driving forward a programme of ever faster, more powerfully armed light draught capital ships, these three ships were woefully under armoured - the penalty for their speed and big guns on a relatively light displacement hull. COURAGEOUS, laid down at Armstrong’s yard on the Tyne in March 1915 and completed in January 1917, carried four 15 inch (381mm) guns in twin turrets fore and aft and eighteen 4 inch (101mm) guns: she was 786 feet long and developed 90,000 shp which with a displacement of only some 23,000 tons gave her 32 knots at full power.. Joining the Grand Fleet - still absorbing the lessons from the Battle of Jutland of the penalties of under-armouring - her light 3 inch (76mm) side plating and total lack of vertical armour did not endear her to the Commander-in-Chief who also considered her to be unsuitable for either battle cruiser work or cruiser and scouting tasks. She fell into neither camp and proved to be expensive on manpower too, so on cessation of hostilities she was quickly relegated to the role of a gunnery training ship at Portsmouth.

It was not surprising therefore that when the Navy, keen to capitalise in the early 1920’s on the usefulness of carrier borne aircraft was casting round for suitable fast hulls that were already in existence, eyes alighted upon COURAGEOUS and GLORIOUS (FURIOUS has already been part converted to a carrier). And so both ships started to be rebuilt as carriers, COURAGEOUS emerging from Devonport dockyard in 1928 upon which she was sent to join the Mediterranean Fleet for 2 years.

Painted here in 1932 when she was with the Atlantic Fleet the keen observer will note that the painting shows a Royal Standard at the masthead: and fortuitously the back of the framed original has glued onto it an extract from the ship’s Daily Orders: the date is Tuesday 12th July 1932 (the painting is signed “1932”).

From Daily Orders we learn that HM The King did indeed embark in HMS COURAGEOUS (Captain C V Robinson RN), in Weymouth Bay, on this day - at 1253 together with HRH The Prince of Wales and HRH Prince George. And at 1702 the two Princes took to the air in “3 F’s” (Fairey IIIF reconnaissance planes?) for “air experience”: they landed on again 28 minutes later at 1730 Daily Orders says

This is a very well executed painting by a master of detail - WL Wyllie’s eldest son who had commanded squadrons in the Royal Flying Corps in France and England during the Great War - had clearly been well trained to observe detail both by his famous father and during his service with the RFC! Why he painted this occasion when King George V visited COURAGEOUS off Weymouth Bay is not known.

Copyright of this painting is being sought from Harold Wyllie’s estate: if permission is obtained it is planned to make a limited edition of 25 copies of it with which will be provided a copy of that Daily Orders extract.