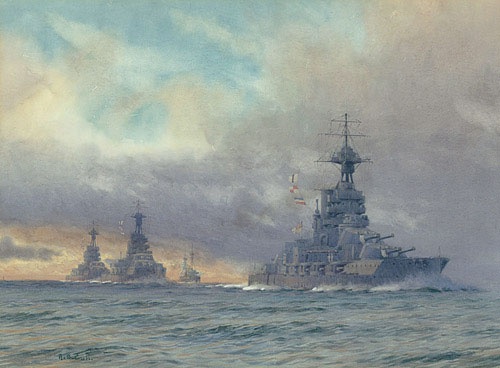 Unusually for him, Cull has not dated this beautiful watercolour entitled in his own hand, verso, “EMPEROR OF INDIA and Squadron” together with another pencil note which says “EMP, MARL, BEN” (referring to the order of the line?). And so some detective work has proved necessary. With paravane chains not rigged forrard we are almost certainly looking at a post WW1 scene; and with no stump mainmasts fitted (they were stepped in 1920-21) we have narrowed the scene down to before 1920. Further refinement is possible as EMPEROR OF INDIA is not wearing an admiral’s flag in this painting (something Cull would never have omitted!) though in the early summer of 1919 she did indeed become a flagship, Rear Admiral Culme-Seymour hoisting his flag in her. The scene is therefore considered to be the spring of 1919.

At this time the 4 ships of the Iron Duke Class were preparing for service in the Mediterranean: The Emperor’, as she was known, and MARLBOROUGH had both recommissioned in March of that year (in Portsmouth and Devonport respectively) with IRON DUKE and BENBOW to commission later that year in Portsmouth and Malta respectively. Leading the ships in this watercolour is HMS EMPEROR OF INDIA (Captain J C W Henley RN) and following astern HMS MARLBOROUGH (Captain C D Johnson MVO DSO RN) and HMS BENBOW (Captain C D Carpendale CB RN). HMS IRON DUKE (Captain W W Fisher CB MVO RN) is nowhere to be seen but out to port of the battleships is what looks like a four funnelled armoured cruiser of the Minotaur Class, MINOTAUR or SHANNON, who were within months of paying off for disposal.

The squadron - all of which had joined the Grand Fleet from build in 1914 - was to serve in the Mediterranean from 1919 until 1926, being variously engaged in Black Sea operations and other post war commitments in that region including extensive showing the flag cruises. Anecdotes of EMPEROR OF INDIA of those inter-war days in the Med Fleet always mention her as the smartest battleship in Malta with the beautiful oak quarterdeck’ (others’ decks were of teak, the more traditional material for this holiest of holy spaces). Memorable also was the loyal toast in the battleship’s wardroom, “The King Emperor” (it was “The King” in every other ship); and the crowns surmounting the top of her jack and ensign staffs each of which, exceptionally, sat on the insignia of a viceregal cushion.

More historical notes on EMPEROR OF INDIA and her sisters appear in several places elsewhere on this website.