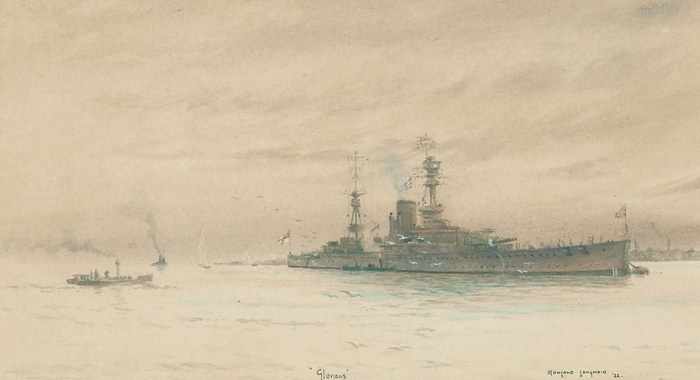 A rare painting of a rare ship - HMS GLORIOUS (Captain R H Bather CBE RN) was one of the Courageous class, she and her only sister, COURAGEOUS, being laid down as “large light cruisers” (because we are told the Treasury would not pay for anything larger!) as part of Admiral Jackie Fisher’s Baltic Landing project. Light, fast, heavily gunned ships were what Fisher wanted: and that meant that armour would have to be minimal. The Battle of Jutland had taken place only some 6 months earlier and the Baltic project had been well and truly shelved by January 1917 when both ships were completed, and Admiral Sir David Beatty, Commander-in-Chief of the Grand Fleet, was hard pushed to know what to do with these two big, terribly under armoured ships.

For big they were. By now (1917) officially classed as battle cruisers they were, at 786 feet length overall, only some 10 feet shorter than RENOWN and REPULSE (they had been laid down only a couple of months after these latter two ships). The Baltic Landing project had required a draught of no more than 22 feet (a good 5 feet less than contemporary capital ships) and so relatively light construction and omission of heavy armour was necessary to enable them to operate in the shallow Baltic where no other big-gunned ships could venture. They mounted 4 x 15 inch guns and 18 x 4 inch and with their large single funnel and sweeping, curvaceous hull form they were impressive looking indeed. But so soon after the lessons of Jutland had been so dearly bought Beatty did not need impressing with these kind of statistics: he needed his capital ships to be able to at least withstand German heavy shell - and with their lack of decent armour GLORIOUS and COURAGEOUS could not. Initially the former was employed as flagship of the 3rd Light Cruiser Squadron and then the 1st Cruiser Squadron of the Grand Fleet (and she saw action at Heligoland Bight in November 1917 where she suffered splinter damage).

Lieutenant Commander Rowland Langmaid has dated his painting 1922 and until May of that year she was flagship of the Reserve Fleet Devonport, Rear Admiral C D Johnson CB DSO MVO (although interestingly Langmaid, who did know his flags, has her wearing the flag of a vice admiral in the painting. On Admiral Johnson’s departure to become Rear Admiral 1st Battle Squadron on 3rd May 1922, the post in GLORIOUS reverted to being held by a four ring captain and at no stage do records show that GLORIOUS was flagship to anyone more senior than a rear admiral that year). As the Devonport gunnery sea training ship also, the battle cruiser would have taken scores and scores of trainee gunnery officers, gunners and gunnery instructors to sea for training drills and firings and as such she would certainly have earned her keep. But both ships were still not satisfactorily employable in front line roles and so when the need for bigger, faster and more capacious aircraft carriers was mooted, GLORIOUS and COURAGEOUS were obvious candidates for conversion: together with HMS FURIOUS the three ships would form the Fast Flying Squadron.

GLORIOUS entered Rosyth dockyard in February 1924 for conversion work to start and was then towed to Devonport for completion in January 1930. Up to the late 1930s both ships, we read, were regarded as very satisfactory and only when the new generation of large, purpose built carriers, ARK ROYAL and the Illustrious Class started entering service did GLORIOUS and COURAGEOUS become obsolete. Both were to survive only a short time once war broke out again in 1939: COURAGEOUS was sunk on 17th September by a German submarine and 9 months later, on 8th June 1940, GLORIOUS was sunk off Narvik by SCHARNHORST and GNEISENAU.