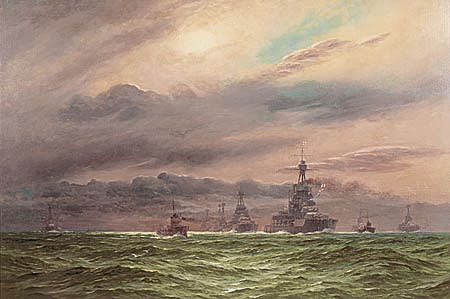 Dominating the foreground is IRON DUKE (Captain F C Dreyer CB RN) wearing the flag of the Commander-in-Chief Grand Fleet, Admiral Sir John Jellicoe GCB KCVO. The Admiral had hoisted his flag in IRON DUKE upon assuming command of the Grand Fleet on the outbreak of war nearly two years previously and she was to remain his flagship throughout his entire appointment which terminated in November of that year when he was relieved by Admiral Beatty. Astern of the C-in-C and leading the 3rd Division, 4th Battle Squadron is REVENGE (Captain E B Kiddle RN) who had commissioned barely a few weeks earlier and had been working up all month in the Scapa areas; then comes SUPERB (Captain E Hyde Parker RN); and faintly discernible astern of her is the battleship that had been destined for the Chilean navy but which was promptly commandeered on the outbreak of war by the First Lord of the Admiralty, Mr Winston Churchill, CANADA (Captain W C M Nicholson RN).

Out on the starboard beam of the C-in-C  to the left of the picture  are ships of the 4th Division of the same battle squadron, though their flagship, BENBOW, has not been included in the painting. Leading the line here is BELLEROPHON (Captain E F Bruen RN) who is followed by TEMERAIRE (Captain E V Underhill RN) and VANGUARD (Captain J D Dick RN). Over on the far right side of the painting is ORION (Captain Oliver Backhouse CB RN) the flagship of the 2nd Division, 2nd Battle Squadron, Rear Admiral Arthur Leveson CB; and to starboard of her appear to be THUNDERER (Captain J A Fergusson RN), CONQUEROR (Captain H H D Tothill RN) and MONARCH (Captain G H Borrett RN). One of the destroyers in the foreground is almost certainly DEFENDER (Lieutenant Commander L R Palmer RN) and the other is possibly OAK (Lieutenant Commander D Faviell MVO RN), though one entry in the Fleet Programme suggests that she may have been dry docked in Greenock at this time.