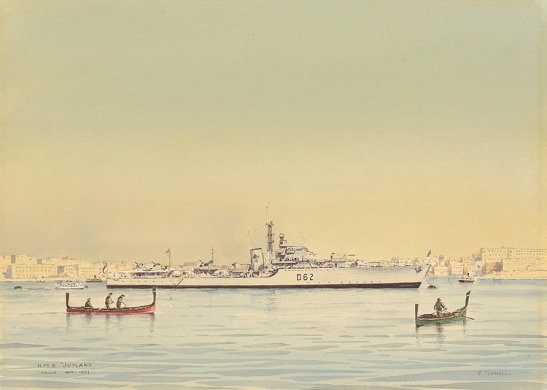 HMS JUTLAND, commanded here by Commander I M Balfour MBE RN, was one of the 8 Later Battle Class destroyers and had first commissioned in 1947. Malta at this time was the Royal Navy’s principal naval base in the Mediterranean and was headquarters of the Commander-in-Chief Mediterranean Fleet.   Malta’s facilities were extensive with berthing and dry docking available for the largest of surface warships and submarines, air stations, sporting facilities and a wide range of supporting services. With conditions back in Britain in the early 50s still depressed from years of wartime austerity, Malta -  awarded the George Cross by King George VI for the heroic bravery of its people during the war when its naval and airbase facilities ensured it was under constant attack - was a popular place for the post war navy to be based and to visit: in summer the weather was glorious, the sea warm and clear for bathing parties, the cricket and polo pitches a bit short of grass but at least dry. And in winter there was also a wealth of attractions from cheap drink in the multitude of fun watering holes in Malta’s fascinating streets and alleyways to numerous football and rugger pitches and the endless round of cocktail and dinner parties, the opera and dance halls and the fun to be had in the fleet canteen: there was something for everyone - admiral to boy seaman  and the 4th Destroyer Squadron, to which JUTLAND belonged - would have enjoyed themselves to the full.

Shown here lying to buoys in Sliema Creek  home for the escort vessels and minesweepers of the Med Fleet  JUTLAND would have had at least one dghajsa commissioned to act as her water “ferry”. Dating back to at least Phoenician times these attractive craft, the traditional fishing boat of the Maltese islands, were to be seen everywhere in the harbours of Malta and much use was made of them by the Med Fleet ships, many of which carried “their” dghajsa onboard whilst they were on station. Two are pictured here by Tufnell in the foreground.

Provenance: from the private collection of the late Rear Admiral John Templeton-Cotill CB who served aboard JUTLAND as First Lieutenant and commissioned this watercolour of the ship in November 1951 and who later went on to be Flag Officer Malta.   Also based in Malta at the time of this watercolour was the frigate HMS MAGPIE commanded by HRH Prince Philip, then a Lieutenant Commander.