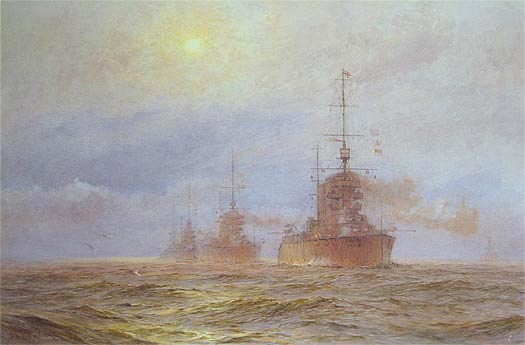 Provenance: formerly the property of the fifth Earl Howe the original is now owned by Michael French Esq

A windy sky, a haloed sun and a rising sea are all beautifully captured by Cull with his incomparable skill in this watercolour which may well have been painted to mark one of two important dates which Rear Admiral David Beatty (commanding the 1st Battle Cruiser Squadron) had in the earlier part of what was to be the momentous year of 1914. The first was a diplomatic mission to the French port of Brest where Beatty was charged with furthering Anglo-French naval co-operation so that in the event of war in Europe these two great fleets would be able to operate together with some reasonable harmony: that visit was in February 1914 and Beatty took LION (flag), PRINCESS ROYAL, QUEEN MARY and NEW ZEALAND with him. The second, with the same ships, was a visit to Riga, Revel and finally Kronstadt where amongst many other invitations was one for Beatty and his captains to lunch, en famille, with the Tsar at his country palace of Tsarskoye Selo. In return, the Royal Navy heavy squadron threw a large banquet for 2,000 guests followed by a ball aboard the flagship and NEW ZEALAND who were rafted up together to provide the necessary space for it all! The year is right, the ships are right and the interest that both these visits sparked in the British media makes it well possible that Cull decided to base this painting on one of these diplomatic missions in 1914. Both visits were rated highly successful and on his return from the latter Beatty was appointed KCB in the King’s Birthday Honours List