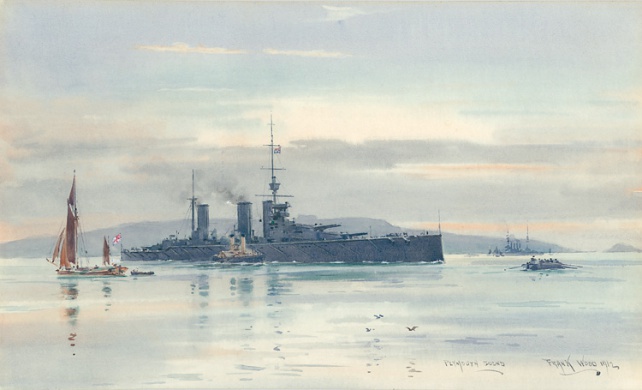 The setting is very familiar to those who know Frank Watson Wood’s Plymouth seascapes: a view looking south east across Plymouth Sound with a capital ship steadying on a westerly course having just navigated up through the Smeaton Pass on her passage inbound into the great naval base and dockyard of Devonport. Shortly she will pass Drake’s Island to port before altering round to port herself, steadying briefly on a south westerly course and then coming hard round to starboard to round Vanguard Bank and then northwards towards the naval base.... it was - still is - hard work getting a big ship into Plymouth and meticulous navigation and pilotage is necessary!

The capital ship in question is HMS LION (Captain A A M Duff RN), lead ship of a new class of armoured cruiser (for so battle cruisers were first called) and its possible to date the painting very precisely. As originally completed in January 1912, LION, as lead ship of the class, ran extensive first of class trials and to no one’s great surprise it seems, her funnel and foremast arrangement caused impossible problems for the control top on the foremast which was not only smoked out but, at any sort of speed, cooked out as well by the forrard funnel which then lay slightly ahead of the foremast!  Although this was a problem that had been well documented in DREADNOUGHT and the Orion Class dreadnoughts of earlier years it required fixing and their Lordships determined to make it so for  LION and her sisters PRINCESS ROYAL and QUEEN MARY, 3rd and last ship of the class and  completed with the problem already ironed out. And so LION was taken in hand by her builders (Devonport Dockyard), the forrard funnel was moved aft, the bridge was enlarged and moved aft too and a new foremast was stepped between bridge and funnel: at a stroke the control top was no longer smoked and cooked out - except in a strong following wind! All this rearrangement of the furniture had significantly altered the ships’ appearance by the time she resumed sea trials in late spring 1912: all was considered successful and on 4th June 1912 she was formally commissioned at Devonport, becoming flagship of the 1st Cruiser Squadron: Rear Admiral Lewis Bayly CVO hoisted his flag in LION two weeks later. This watercolour shows LION in her new configuration but not yet wearing Admiral Bayly’s flag, and must therefore be of the period April - mid June 1912.

An early Frank Wood (he was painting for another 40 years after this) , it shows his skills in a particularly favourable light: a delicate sea and sky and LION herself painted with a very light touch with fine detail, a style he was to move away from as he grew older.