(MP500). W L Wyllie (1851-1931). Watercolour signed and dated 1917. Provenance: from the collection of Admiral of the Fleet Prince Louis of Battenberg and thence by descent to Lord Ivar Mountbatten. 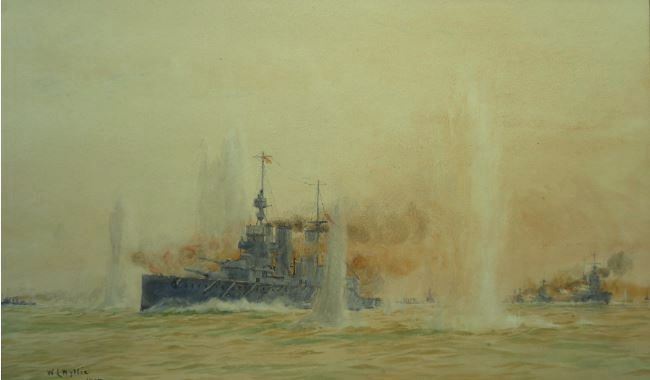 This painting together with a further eight of W.L.Wyllie’s watercolours of affairs at sea in the Great War was originally purchased in 1917/18  by Admiral of the Fleet Lord Louis Mountbatten, 1st Marquess of Milford Haven (1854-1922), formerly styled Prince Louis of Battenberg, and Great Britain's First Sea Lord from 1912-1914. It is thought likely that they were bought directly from Mr Wyllie, if not commissioned by the old admiral himself, and until recently had remained in the Mountbatten family. But in 2017 Lord Ivar Mountbatten decided to sell them and Maritime Originals acquired five of the eight watercolours.

With LION's main armament trained to starboard and other capital ships in line astern and also engaged to starboard, this is almost certainly the scene some minutes after completion of Beatty's sixteen point turn to starboard which saw the battle cruisers, supported by Rear Admiral Evan-Thomas' 5th Battle Squadron, turn away from the advancing German High Seas Fleet and reverse course as Sir David tried to entice the enemy up to the north and into the arms of Sir John Jellicoe and the heavy guns of the Grand Fleet.  The battle cruisers have now finished their heavily criticised manoeuvre whereby the ships wheeled to the north in succession, thus giving the Germans a wonderful ranging opportunity as Beatty's ships all pivoted around a static point. Had they turned together (and not wheeled in succession) this vulnerability would not have been created and  only Captain Edward Phillpotts of WARSPITE, last in line, avoided this tactical error by turning his ship early.  Was this flawed manoeuvre constructed by Beatty himself or had he, quite reasonably in the noise and confusion of the battle with incoming shells roaring over his head and collapsing shell splashes all but drowning those on the bridge, delegated the mechanism of the manoeuvre to his hapless Flag Lieutenant, Lieutenant Commander Ralph Seymour?

In this painting LION would have been on her northerly heading for some minutes; she is followed by the remaining battle cruisers which are fallen in astern and are also steering north. The ship astern of LION, with her configuration of two funnels then one much further aft, appears to be PRINCESS ROYAL, the one astern of her is painted with a foremast only and three funnels in one block which would make her TIGER; and astern of her would be NEW ZEALAND - just indeed as historical records show the ships to be disposed at this stage of the battle.  HMS QUEEN MARY and INDEFATIGABLE had by now (approx 4.45 pm) been lost.  And Wyllie's painting also shows us what is almost certainly another capital ship to the right of LION's stern which would be BARHAM leading Evan-Thomas’ 5th Battle Squadron which had very belatedly followed Beatty and the battle cruisers round to a course of north, the 'Run to the North' as it subsequently became known.

Or despite the flattish sea state and amber North Sea sky which we know prevailed on 31st May 1916, are we perhaps looking, as some have suggested, at an entirely different and earlier action, Dogger Bank?  LION had had her torpedo nets removed by 1916 (Dogger Bank was January 1915 and Jutland May 1916) and Wyllie - famously noted for his accuracy of  detail - clearly shows torpedo nets still fitted which would support the Dogger Bank as the painting here.  But the overwhelming evidence provided by the unique TIGER with her single mast and three funnels - and critically significant too, in her correct place in the line for the Jutland action – and the fact that both QUEEN MARY and INDEFATIGABLE are absent from the painting - points to the fact that we are looking at the Run to the North at Jutland and not the Dogger Bank action.  Furthermore, at Dogger Bank TIGER was directly astern of LION and not as shown here so perhaps Wyllie just forgot not to include LION's torpedo nets as he had grown so used to the battle cruiser's appearance when he had painted her many times in the years before the nets were landed ashore!