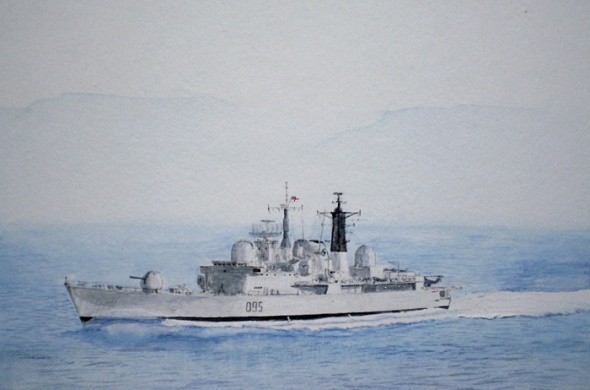 The 4 beautiful ships of Batch III of the Sheffield Class, MANCHESTER, GLOUCESTER, EDINBURGH and YORK are some 50 feet longer than their earlier 10 sisters. Completed in 1982 MANCHESTER has served all over the world: indeed the whole the class has been heavily employed in the many tasks that have come the Royal Navy’s way these past three decades since SHEFFIELD, first of class, entered service. Now nearing the end of their careers the Batch III’s still delight the eye with their long, lean bows and business like appearance qualifying them for a worthy place amongst the ranks of handsome looking British destroyers that have gone before. MANCHESTER has now de-commissioned, one of 14 destroyers replaced by a mere 6: another hopeless decision by the government of the day who really don't understand why we need warships at all, it seems,  and to whom the whole concept of "defence" is anathema.  The artist, Max Cosby (1988), has long been an admirer of warships and all things nautical and has been drawing and painting them since he was a boy.  He is now in the Fleet Air Arm and flying in Wildcat helicopters which he loves.