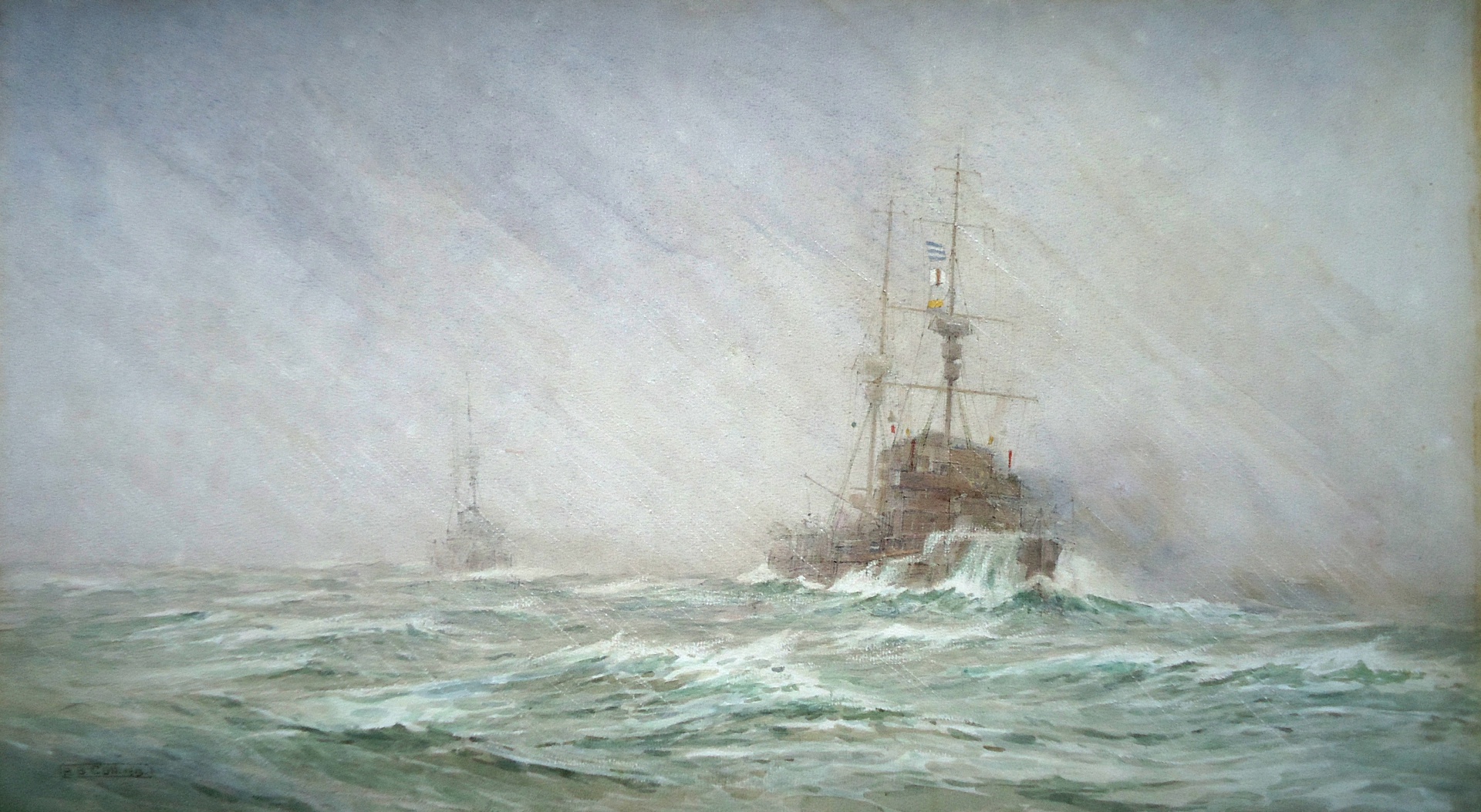 £120- £140 at the original's size including mounting/matting

HMS NATAL and her sisters, ACHILLES, COCHRANE and WARRIOR were regarded by many of those who served in them as outstandingly fine sea boats - NATAL is certainly being put to the test here in this watercolour.  She was completed in 1907 and with a displacement of 13,500 tons these armoured cruisers were large for their type, the County Class 8 inch heavy cruisers of the 1930s and 40s being only of some 10,000 tons.  NATAL mounted  six x 9.2 inch and four x 7.5 inch guns and on a good day could knock up 22 knots, a speed regarded as very respectable in those days even if an assortment of 25 boilers was required to achieve this!

NATAL (Captain Clement Greatorex) together with ARGYLL (Captain Michael Culme-Seymour), COCHRANE (Captain Edmund Goodenough) and DEFENCE (Captain Henry Bruce) was part of RMS MEDINA's escort in 1911-1912 when the latter was wearing the Royal Standard of King George V for his visit to India for the Delhi Durbar of December 1911; and in December of 1912 she was chosen to carry the coffin of the late US Ambassador to the Court of St James in London, Mr Whitelaw Reid, back to New York.  The marine artist W L Wyllie recorded this event in a well known etching which shows the cruiser leaving Portsmouth naval base, a large half masted Stars and Stripes flying prominently from her mainmast. The subsequent crossing of the Atlantic saw NATAL encounter 90 knot winds and unusually large seas and during the night of 23rd December storm force winds brought down the maintopmast and several plates of the hull up forrard were stove in; boats were lost and areas down below flooded.  But a navy that had had centuries of worldwide weather experience meant NATAL took this in her stride and she duly arrived in New York with all but the worst of the storm damage sorted, brasswork shining and bunting flying from  masts that had been largely re-rigged.

These events ocurred whilst Captain Clement Greatorex was in command (June 1911-May 1913) and this watercolour comes from a relative of his who has lived for many years in New Zealand. The date Cull has dated the painting, 1913, very possibly indicates that Greatorex commissioned Cull to paint this watercolour of his command on leaving her (a not unusual thing) which has subsequently descended through the family. Clement Greatorex went on to become Flag Officer Shetlands during World War 1 and after the war he was appointed Rear Admiral Commanding Portsmouth Reserves with his flag in the battle cruiser HMS COURAGEOUS.  HMS NATAL (whose building was largely financed by contributions from the colony of Natal, Southern Africa) came to a tragic end.  On 30 December 1915 whilst lying at anchor off Cromarty, Scotland, she was destroyed by an internal explosion with the loss of over 390 lives: unstable cordite in a magazine aft was held to be responsible.

From the brush of Alma Cull this watercolour carries many of his hallmarks: a wonderfully realistic stormy sea and sky with delicate diagonal slashings of the paper to suggest gale driven sleet; accurate draftsmanship of the warships and, above all, a marvellously atmospheric effect of the cruisers as they battle, pitch and roll their way through some pretty vile weather.