HMS NEW ZEALAND with HMS ONSLOW rafted up alongside

(MP498). W L Wyllie (1851-1931). watercolour signed and inscribed in the artist's hand "Onslow and NZ". Provenance: from the collection of Admiral of the Fleet Prince Louis of Battenberg and thence by descent to Lord Ivar Mountbatten. 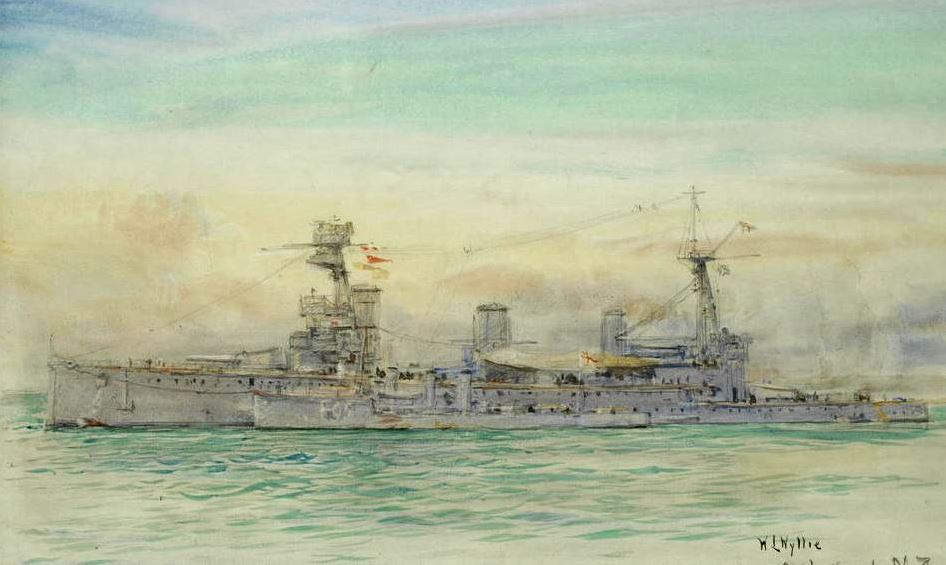 This watercolour, undated by the artist, can nevertheless be pinned down to the fairly narrow 18 month period of post Jutland (May 1916) to late 1917 (after which a heavy nest of searchlights was fitted around the centre funnel and an anti aircraft gun was mounted on the after end of the after superstructure).  In command of the battle cruiser HMS NEW ZEALAND was still Captain J F E Green CB RN who despite being in the thick of the action had managed to bring his ship unscathed through Jutland; and in command of HMS ONSLOW was Lieutenant Commander Jack Tovey who also had had a hairy time at Jutland for which he had been Mentioned in Despatches and then subsequently decorated with the DSO. Some twenty years later Tovey, now a full admiral, was appointed to the command of the Home Fleet and  with his flag in HMS KING GEORGE V he had masterminded the pursuit of the battleship BISMARCK and her heavy cruiser consort PRINCE EUGEN, and BISMARCK's subsequent destruction.

What brought the small destroyer to be lying alongside the large battle cruiser is not known: a spot of engineering support from the more experienced team in the battle cruiser or the use of her large and well equipped engineering workshops?  An administrative errand being run by ONSLOW; the transfer of  personnel to NZ? Whatever - Wyllie has captured the scene superbly in this sketchily executed painting, a painting in which the pencil strokes of the draft are still visible.  It probably originates from one of his visits to the Grand Fleet at Scapa Flow.

The painting together with a further eight WL Wyllie watercolours of World War 1 scenes of affairs at sea was originally purchased in 1917/18 by Admiral of the Fleet Lord Louis Mountbatten, 1st Marquess of Milford Haven (1854-1922), formerly styled Prince Louis of Battenberg, and Great Britain's First Sea Lord 1912-1914. It is thought likely that they were bought directly from Mr Wyllie, if not commissioned by the old admiral himself, and they have been in the Mountbatten family since: they were recently sold by Lord Ivar Mountbatten.