(MP203). Oscar Parkes OBE MB Ch B (1885-1958). Watercolour signed but undated. Label on back reads: "SNAP  the two "Queens" meet for the first time. As HMS QUEEN ELIZABETH passed her giant namesake this short and appropriate greeting was hoisted to mark the occasion.. 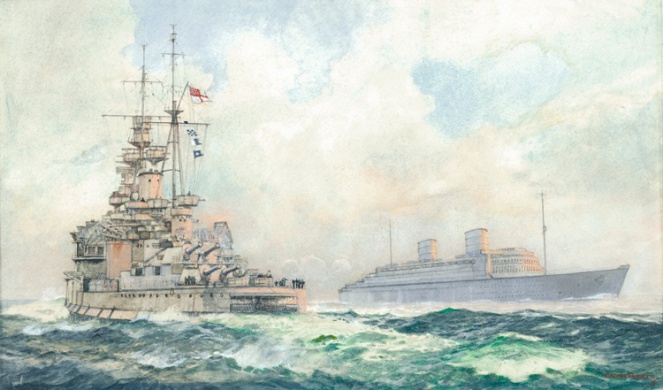 Specially painted for the magazine "The Navy"

This event took place according to Cunard records “sometime in 1941 in the southern approaches to the Red Sea” (letter headed “Cunard White Star Limited  Publicity Department” , dated 12th August 1949 and addressed to Commander Ralph Handcock RN). The Commander was clearly digging for more information, however, and in a further letter to him dated 13th September 1949 and this time from the Navy League, the Editor’s Secretary quotes a note from the artist, Oscar Parkes, saying ” The Two Queens story was given out in ’46 about the time I sent in my picture of the incident, but I understand the meeting took place when the battleship was returning from her refit in the USA after being damaged by a frogman in Alexandria Harbour. If so it would be about June ’42, but it is very difficult to substantiate dates and the only satisfactory way would be to consult the ship’s log and it may or may not have been entered”. The Editor’s secretary goes on to say “it has been pointed out to me that this would have been a private signal and it is very improbable that it would have been recorded...”

A private flag hoist from HM Warship to HM Troop Transport it may have been but there is little doubt that such a meeting with the world’s largest and fastest merchant ship would have been entered in HMS QUEEN ELIZABETH’s Deck Log  if not RMS QUEEN ELIZABETH’s too! The battleship who had indeed been badly damaged by very skilfully placed Italian limpet mines on 19th December 1941 in the Royal Navy’s eastern Mediterranean base of Alexandria in Egypt, was subsequently lifted in a floating dock where emergency repairs were carried out to enable her to steam elsewhere for more permanent work to be done. On 5 May 1942 she proceeded to Port Sudan where her fuel tanks were repaired and oil fuel embarked for passage to the USA. She sailed for Norfolk, Virginia in mid July and underwent permanent and extensive repairs between September 1942 and June 1943, dates that appear to be at odds with the letters quoted above.

Further confusion arises as in his book “Make Another Signal”, Captain Jack Broome RN says  HMS QUEEN ELIZABETH and Cunard liner QUEEN ELIZABETH met for the first time in mid-Atlantic:  HMS QUEEN ELIZABETH to RMS QUEEN ELIZABETH: “SNAP!”  Although in their initial trooping voyages from Singapore and Australia the great liners were routed up the Red Sea to Suez via the Indian Ocean, by 1942 when the artist believed this rendezvous to have occurred, with America now in the war, Cunard's  QUEENs did most of their trooping across the North Atlantic: and so Jackie Broome’s version of the Atlantic as the meeting place is also plausible. No matter  its a superb Oscar Parkes watercolour of an amusing event and is one of not too many paintings of the great liner in her wartime livery.

Dr Oscar Parkes, a practising General Medical Practitioner, had served in the Naval Intelligence Division at the British Admiralty during the Great War and when he left the Service in 1920 it was to be as editor of Jane’s Fighting Ships, a post he held until 1935. He had always drawn and painted we are told and some of his watercolours, always hard to find, are very well regarded today. Copyright of this painting is being negotiated with the relevant authorities.