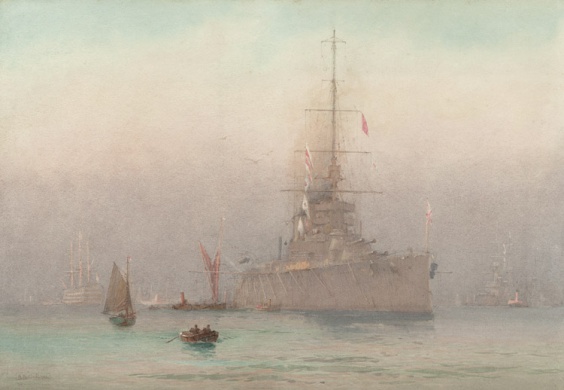 Alma Cull like so many of his contemporaries was clearly fascinated by the great new dreadnought battleships and battle cruisers that were joining the Royal Navy in increasing numbers since HMS DREADNOUGHT herself had commissioned in 1907. As well he might be for these huge, powerfully armed ships were also things of beauty and provided a most satisfactory challenge for the marine artists of the day who were keen to show how power and strength could be allied with grace and elegance. QUEEN MARY fitted that description admirably.

The new battle cruiser HMS QUEEN MARY was built at Palmer’s on the Tyne and after constant delays caused by industrial problems she was finally commissioned into the Royal Navy at Portsmouth on 4th September 1913 under the command of Captain R H Hall RN. Now Reginald Hall was a commanding officer who did not fit the archetypal “drive and punish” senior captain image still prevalent in the Senior Service of the time and indeed such was his reputation as an enlightened and thinking reformer that the Admiralty tasked him with evaluating running his ship  the largest warship in commission in the world  without a master-at-arms or ship’s corporals, the ship's 'police'.  At heart a strict disciplinarian, “Blinker” Hall (he had a noticeable facial twitch which his term mates at BRITANNIA had gleefully immortalised!) realized the possibilities of this idea and thanks in large measure to the imaginative and personable way he launched the trial it was a total success and was subsequently widely adopted in the Fleet. He also encouraged his Executive Officer, Commander William James (later to rise to full admiral), to introduce a three watch system into the ship: hitherto two watches had been the norm but Blinker felt that with the pace of activity onboard stepping up as ships became bigger, more capable and inevitably busier, the old system would fail under pressure of the war that, sooner or later, was surely approaching.  And on the outbreak of war in August 1914 all capital ships duly adopted Hall’s system.

A deeply religious man at heart too, he believed that a ship as large as his should have a dedicated place of worship set aside and so he had the dockyard build a chapel in QUEEN MARY. The first ever in a warship, this idea too was eagerly taken up by other large ships as were still more of this innovative captain’s ideas: he had chief and petty officers’ messes in his ship more comfortably fitted out properly to reflect the status of these important NCOs; a purpose built ship’s laundry was introduced in QUEEN MARY, the first in one of  HM Ships; and  bookstalls were installed with books accessible to all onboard.  And perhaps most popular of all, the battle cruiser soon boasted a cinema projector, the very first seen in the Royal Navy. All Blinker’s ideas, and when he was relieved early in the Great War due to sickness, QUEEN MARY’s loss became the Admiralty’s gain when Hall was appointed Director of Naval Intelligence in October 1914. Establishing the legendary “Room 40” Hall’s huge contribution to the war effort has been well documented.

Dated by Cull 1913 this is perhaps QUEEN MARY’s first appearance at Portsmouth (she commissioned there on 4th September) and from what we can glimpse on this misty day it may well be that she is ammunitioning with her first outfit of 13.5 inch shells: flag Bravo is close up on the port yardarm, ammunition lighters are secured alongside starboard midships and what looks like a working party of sailors is mustered abaft B turret. All three of her giant funnels are emitting smoke so she has perhaps only recently secured to the buoy or else is preparing to get underway again, ammunitioning being nearly complete. In either event the navigating officer, Commander The Hon Arthur Strutt, will be on, or close to the bridge, enabling the captain briefly to attend to things other than the safe conduct of the ship before he is once again required back on the bridge as he takes his ship to sea or manoeuvres her alongside the dockyard wall. In the background to the left we can just make out HMS VICTORY wearing the flag of the Commander-in-Chief Portsmouth, Admiral The Hon Sir Hedworth Meux GCB KCVO, and over on the right of the painting Cull has hinted at further battle cruisers.

The newest member of the recently constituted 1st Battle Cruiser Squadron (Rear Admiral David Beatty CB DSO MVO) with his flag in LION , the QUEEN MARY joined LION (Captain A E M Chatfield CVO RN), PRINCESS ROYAL (Captain Osmond De B Brock RN) and INDEFATIGABLE (Captain Charles Sowerby RN). She would be part of the squadron that paid the historic visit to the Russian naval base of Kronstadt in May 1914 when the battle cruisers found themselves entertaining the Tsar and Imperial Family onboard and holding a lavish ball for some 2,000 guests (see also MP 086, “HMS LION and the 1st Battle Cruiser Squadron”). It was to be almost 2 years later to the day that QUEEN MARY, by then commanded by Captain Cecil Prowse and with Commander Sir Charles Blane Bt as the new Executive Officer, was to blow up in action at Jutland on 31st May 1916 with heavy loss of life: truly hers was a short life.