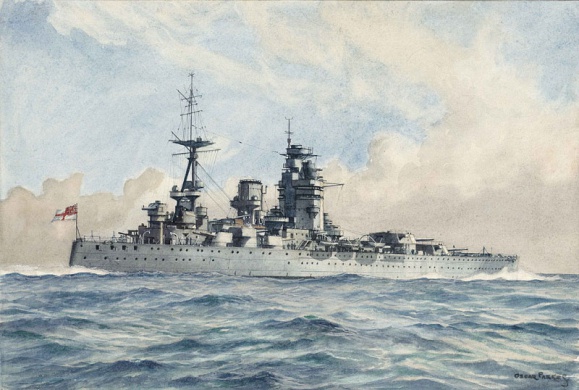 Built by Cammell Laird and launched in August 1927, RODNEY together with her sister NELSON, were Washington Treaty prescribed ships, their displacement tonnage being restricted to 35,000. Famously, they mounted all their main armament forrard and for all the unkind volumes written about their bizarre appearance, unbalanced arrangements, low shaft horsepower and poor handling characteristics, they proved to be useful in service: 20 years of it including 6 hard war years. RODNEY clocked up over quarter of a million miles during her war service and when she finally came to be paid off and broken up in 1948, she was probably worn out.

Dr Oscar Parkes, a practising General Medical Practitioner, had served in the Naval Intelligence Division at the British Admiralty during the Great War and when he left the Service in 1920 it was to be editor of Jane’s Fighting Ships, a post he held until 1935. He had always drawn and painted we are told and some of his watercolours, always hard to find, are very well regarded today, this one of RODNEY being a fine example. Copyright of this painting is being negotiated with the relevant authorities.