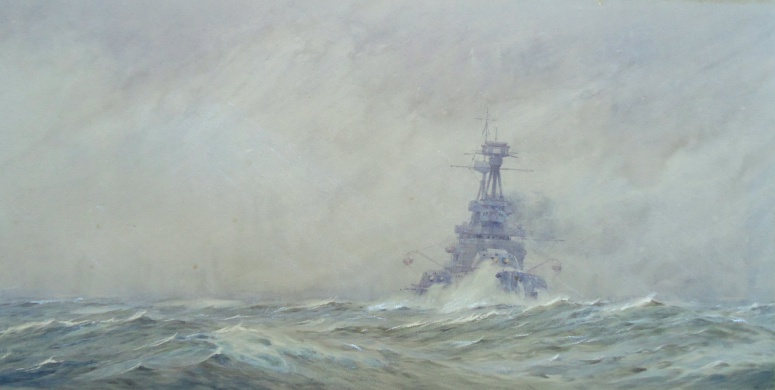 A classic Cull watercolour – a dreadnought emerging from a stormy, lowering sky as she shoulders and shudders her way through big seas, green water pouring off her, huge waves crashing their way aft, icy spray lashing the exposed areas  and screens of the upper deck and superstructure …..  The wind screams through the rigging, bitter tasting sulphurous smoke rolls from the funnels choking those closed up in the spotting tops and in down-wind lookout positions.  Many messdecks down below are a wet shambles as water finds its way through loose rivets and cracks and gaps in fittings; exposed watchkeepers and bridge and fighting top lookouts struggle to stay warm and alert as they peer out, their eyes stinging with the driving sleet and spray.  To the 800 or so of her ship’s company its just another routine day on patrol and with what appears to be the Kelvin Hughes sounding boom rigged to port, the ship is in, or is possibly approaching, shoaling water..…

The dreadnought keeping the seas here is identified, verso, in handwriting which is familiar to collectors of Cull: in either his writing or perhaps that of his agent in the Brook Street Gallery, we read "HMS TEMERAIRE",  a Bellerophon class dreadnought.  Further examination of the watercolour shows that this is the battleship towards the end of the Great War, 1914-18, as by then the class had been much modified, top masts being cut down, control tops enlarged, searchlight towers added and enhanced, and additional bridge  superstructure and sponsons built up (indeed you only have to see MP080 on this website of TEMERAIRE in 1912 and the scale of the build up of superstructure and reduction of top masts is very evident).  Commissioned in May 1912, TEMERAIRE  and her 12 inch gun sisters had been in the line at Jutland and most of the other major skirmishes of the war too and had spent a huge amount of time out at sea patrolling, watching, waiting in weather so often like this: waiting for the opposition to show up.  Scapa Flow in the windswept Orkneys was their base and quite often conditions in there were little better than out at sea with ferocious winds requiring the ships to have steam up just to hold their anchors and avoid dragging.  This in turn required steaming watches to be closed up down below in boiler and engine rooms as well as bridge watchkeepers and a focsle party to be available instantly to veer more cable or let go a second anchor.  There was little rest for anyone.

By the time of this painting TEMERAIRE and her sisters of the Bellerophon and St Vincent classes had been relegated to the second eleven: they were becoming obsolescent and  worn, the years of demanding war service with inadequate time allowed for maintenenace making them old beyond their years.  But in October 1918 as the High Seas Fleet was collapsing and the threat from across the North Sea reducing commensurately, she went out to join the Eastern Mediterranean Squadron and with her sister SUPERB (flagship of Vice Admiral Gough-Calthorpe) was present in Constantinople for the armistice negotations with Turkey. Returned to British waters in 1919 she re-commissioned under Captain L A B Donaldson CMG RN as a cadet and gunnery training ship and she was kept busy in this role for two more years before the Washington Naval Treaty and massive naval cuts following the end of the war inevitably led to the older classes of capital ships being paid off.  TEMERAIRE was scrapped in 1922.

These ships – the like of which we will never see again –  were undeniably impressive and no more so than  when seen on a filthy day and in a large sea like this; and no one captures it better than Cull!