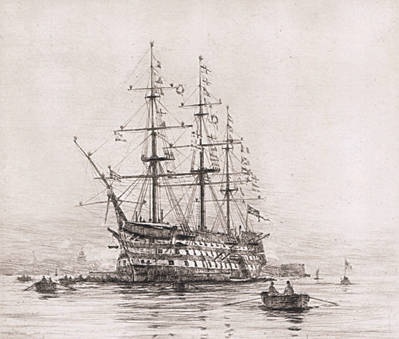 VICTORY's keel was laid at Chatham, Kent on 23 July 1759 and although it had been intended to launch her on 23 April 1765, St George's Day, the ceremony was postponed until 7 May probably because the tide did not reach the expected and necessary height. The admirals who flew their flag in her during her long career at sea include Keppel, Kempenfelt, Howe, Hood, Jervis, Nelson and Saumarez - but it is with Nelson's name that VICTORY is always most closely associated together with that epic of sea fights, the Battle of Trafalgar on 21st October 1805. When she was finally pronounced unseaworthy in 1812, it was to Portsmouth that she returned. By 1921 Admiral of the Fleet the Marquis of Milford Haven, together with the Society for Nautical Research, drawing the attention of the country to this famous ship's now deplorable condition and in December of that year she was moved alongside in the dockyard at Portsmouth. On 12 January 1922 she was moved again - this time into No 2 Dock Portsmouth, the oldest dry dock in the world dating from 1495. Shortly afterwards the enormously complex task of restoring her began. To this day she proudly continues to wear the flag of the senior admiral ashore in Portsmouth, a Vice Admiral, just as Nelson himself had been at Trafalgar.