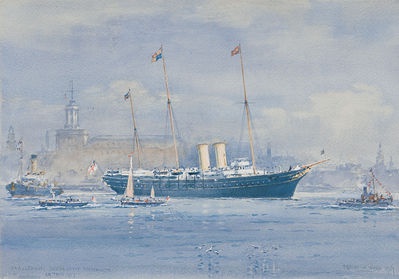 This watercolour, the second of the pair from BRITANNIA's wardroom (see above), shows the scene at Portsmouth shortly after 3.05pm on Thursday 20th May 1937: the Royal Yacht VICTORIA & ALBERT wearing the Standard of HM King George VI is underway for Spithead to review some 160 warships and other vessels gathered for the Coronation Review of the Fleet. In the background is the great dockyard of Portsmouth watched over by Semaphore Tower from whose mast flies the flag hoist indicating that an important vessel is underway and that the harbour entrance is closed to other shipping. Originally built of wood between 1832-1835 and subsequently fitted with semaphore signalling arms which were duly removed with the introduction of wireless telegraphy, Semaphore Tower, together with the adjacent Rigging House and much of the Sail Loft, was destroyed by fire on the night of 20th December 1913. Remaining a shell throughout the Great War, rebuilding started in 1928: this time the tower was built of stone, was 128 feet high and sported a steel mast from the German cruiser NURNBERG who had surrendered to the Grand Fleet in 1918.