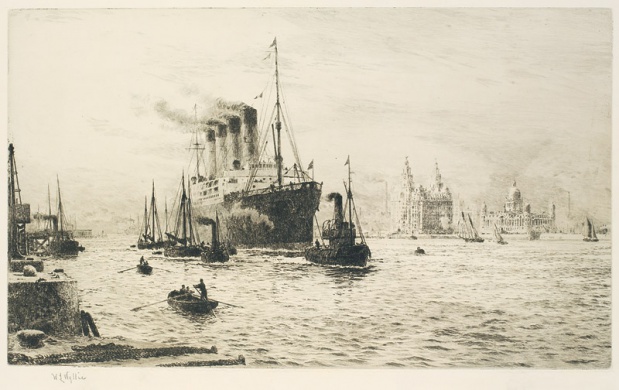 With a tug connected forrard and with the tide clearly making, the beautiful MAURETANIA is about to start her swing to port off Birkenhead as she turns into the flood to make her approach to Cunard’s pier at Liverpool, clearly seen to the right of this highly detailed etching. WL Wyllie has excelled even his impeccable standards with this rarely seen etching.

Launched in September 1906 by Swan, Hunter and Wigham Richardson at Newcastle the 762 foot long turbine driven Cunarder quickly secured the record for the Atlantic crossing. When in September 1909 she covered the distance between Daunts Rock and Sandy Hook at an average speed of 26.06 knots she set a record unbeaten for 20 years  and there was no lack of competitors trying to wrest back the Blue Riband from her!
Following war service with the British Government (her sister LUSITANIA had been torpedoed off the Old Head of Kinsale whilst inbound for Liverpool in May 1915), MAURETANIA suffered a near catastrophic fire whilst at Southampton in July 1919. But she was extensively repaired and refitted by her builders and went on to give a further 15 years of exemplary service where she remained the darling of the North Atlantic and then, in her latter years, the dowager of the cruising circuit dressed in a fetching white. The breakers at Rosyth, Scotland finally claimed this legendary ship in 1935.