THE 70TH ANNIVERSARY OF THE BATTLE OF THE RIVER PLATE, 13 DECEMBER 1939 HMS EXETER IN ACTION 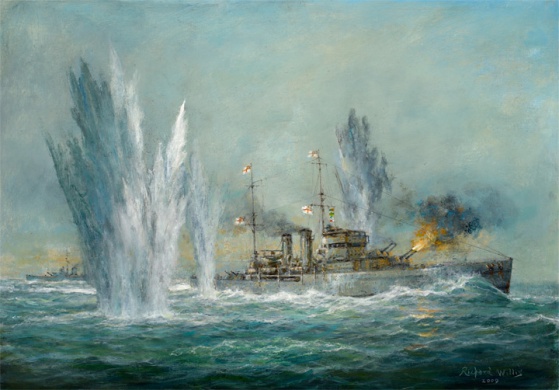 This was the first major naval action of the Second World War: as Churchill said “the brilliant action of the Plate came as a flash of light and colour on the scene...it warmed the cockles of the British heart”. It was a clear example of how a squadron of cruisers, boldly and imaginatively handled, could defeat a superior opponent.

The story of the plucky cruisers, HMS AJAX (Captain C H L Woodhouse ) wearing the broad pendant of Commodore Henry Harwood ; HMS EXETER (Captain F S Bell), and HMS ACHILLES (Captain W E Parry) is well known and this painting, commissioned to commemorate the 70th Anniversary of the battle and first shown at the commemoration dinner in the wardroom of HMS DRAKE in Plymouth on 26th November 2009, shows EXETER in action with her two consorts (one is just discernible over EXETER’s bows).

Although the original is not for sale reproductions on card and canvas are available as below.