The Battle of Jutland: HMS MARLBOROUGH Going into Action 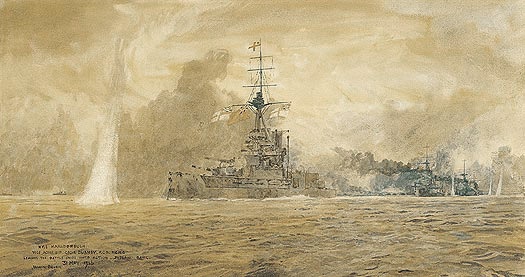 This is the third of Bevan’s watercolours of battleships in action at Jutland that is in Maritime Originals' and Maritime Prints’ collection, the other two being of WARSPITE. Bevan’s formula of emphasising oranges and ambers is successfully deployed for this watercolour which shows MARLBOROUGH wreathed in cordite smoke as her main armament engages the High Seas Fleet to starboard. Funnel smoke from all ships as well as similar discharges of gun smoke from all creates what we are told was hazy North Sea visibility further degraded by some 150 warships in action, many of them at high speed and making additional smoke! A visually dramatic, yet technically accurate, watercolour of Admiral Sir Cecil Burney’s flagship.