The Battle of Jutland: HMS WARSPITE In Action, 31 MAY 1916: the Run to the North 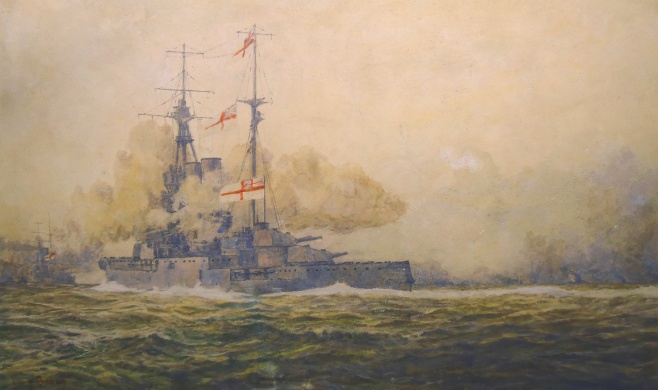 This is one of a pair (the other being MP005) painted by Bevan as a commission for the wardroom who wanted to present the senior chaplain onboard, Walter Carey, with a leaving present when he moved on to pastures new some weeks after Jutland in the summer of 1916. This shows the 5th Battle Squadron and WARSPITE at about 1800 on 31 May in what became known as The race to the North whilst engaging the High Seas Fleet to the south east. A lowering, sultry sky with patchy visibility and heavy with gun and funnel smoke, the painting is charged with atmosphere. WARSPITE (Captain E M Phillpotts RN) is sporting 3 large battle ensigns and following an earlier hit was shortly to suffer a steering gear failure which led to her coming under renewed and very heavy fire as, Not Under Command, she lurched towards the German High Seas Fleet unable to steer except by the use of main engines.  Excellent Damage Control training, however, saved the day and she was able to regain steering and her place in the line.

Irwin Bevan was a contemporary of WL Wyllie with whom he jointly illustrated books: he too was a well known marine artist of his day and his preferred palette which favoured sepia colours, moody skies and muddy, sullen seas perfectly matched the conditions off Jutland on that day a hundred years ago.