The Battle of Jutland: HMS WARSPITE In Trouble at Windy Corner, 31 May 1916 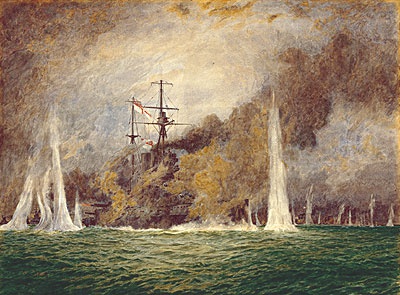 One of a pair (see MP006 for the other in the pair) by Bevan commissioned by the wardroom of WARSPITE for the departing senior chaplain, the Rev Walter Carey, who had performed, we are told, so stoically during the heat of the action: he left the ship for a further appointment a short while after she had returned to Rosyth dockyard for repairs and subsequently became Bishop of Bloemfontein, Southern Africa.  Bevan's watercolour shows the battleship in action at Jutland and captures the the difficult visibility - considerably worsened by the huge volumes of cordite and funnel smoke that were emitted by the participants -  that characterised that late afternoon off the Jutland peninsular when with steering gear jammed to starboard, considerably knocked about already and under heavy fire, she hauls out of line.