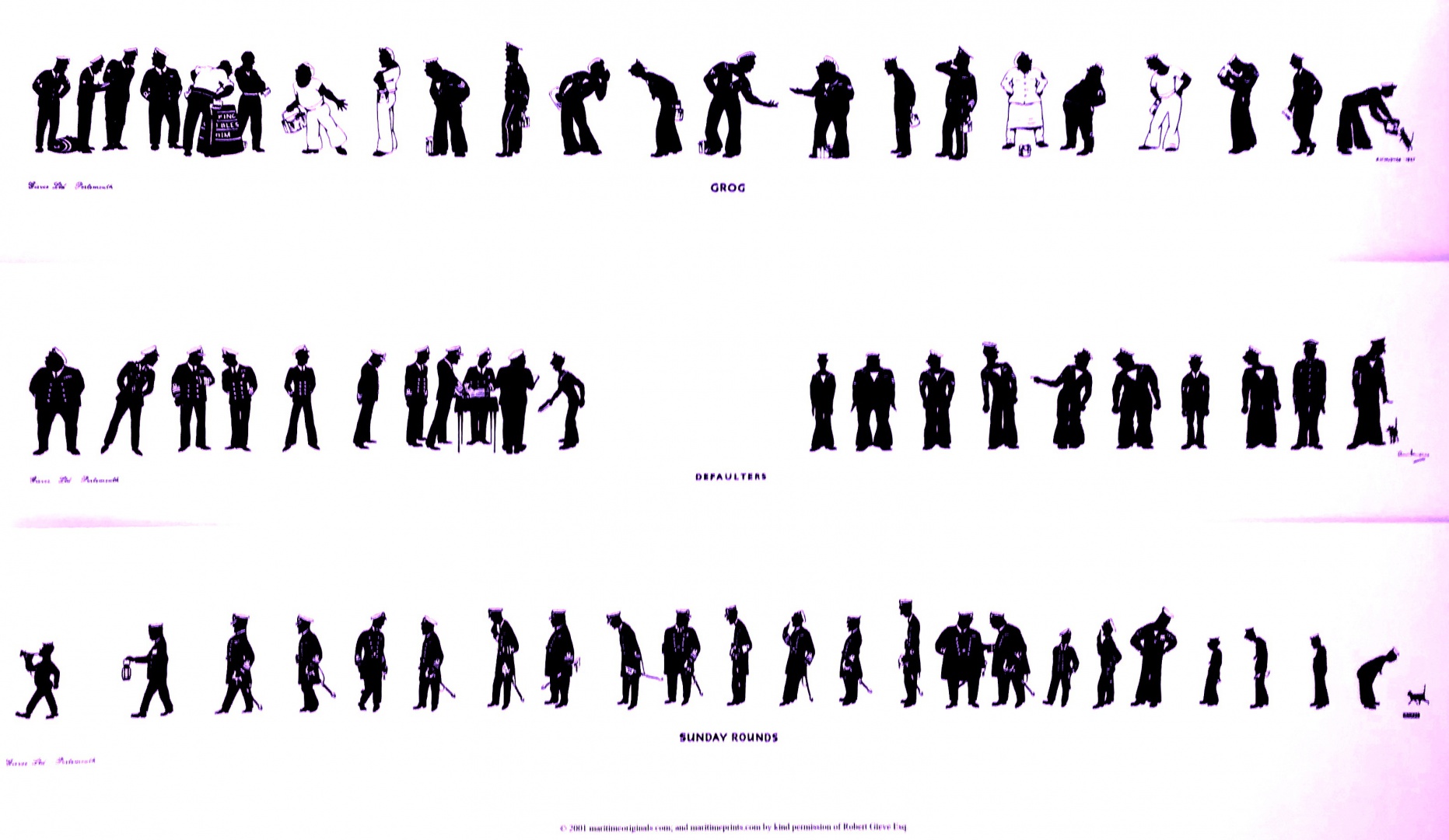 For many generations of naval men, serving and retired, these three silhouettes - Grog, Sunday Rounds and Defaulters- were great favourites and were as familiar as were the immaculately dressed Representatives of the Naval Outfitters Messrs Gieves Limited ("Established 1785") whose premises, together with the White Ensign, were to be found in RN bases across the globe from Wei Hai Wei in China to Halifax Nova Scotia, Valletta, Bermuda, Simons Town, the Falkland Islands, Trincomalee....

GROG: For centuries, a daily rum ration known as Grog was issued to all hands aboard warships of the Royal Navy: it reputedly helped fire them up for battle, gave relief from wretched and uncomfortable living conditions and, though probably not originally intended, provided wonderful and flexible barter for all sorts of favours and payments in lieu..! By the 20th century Grog was required to be issued in watered down form and only to those over 18 years old, the 1/8th of a pint of 95.5 proof spirit (that's 56% alcohol!) being diluted with 2 parts of water for junior rates - though senior rates drew theirs neat ("Neaters"). The wardroom had by the 20th century been excluded from this free issue (they had their gin after all). The daily issue of rum, from a large oak barrel bound with brass hoops and with the words THE KING (or QUEEN) GOD BLESS HIM (HER), was a fantastically laborious process! It started with the Mater-at- Arms' Office calculating precisely how many tots were to be issued that day (who is not onboard, who is under age, who is entitled but wishes to decline, who is turned in in the Sick Bay and is medically unfit for the fiery spirit, who is under certain restrictions as a punishment), to the drawing of the rum from casks (which were heavily locked under lock and key!) by huge copper and brass hand operated pumps. Those who were entitled to Neaters received their share unadulterated with water, the remainder had theirs mixed with the requisite amount of water (minutely calculated!) and stirred - by hand in the best ships - in the rum tub. "Up Spirits" was then piped over the main broadcast (it was by now around noon) and representatives from each of the sailors' messdecks would eagerly muster, tot receptacle at the ready. Each was in turn filled with the apportioned amount of grog which was then hurried down to its parent messdeck where all would be waiting.... At the end of the Daily Issue, any grog remaining was required to be disposed of in view of the Regulating staff and supervising officer: wise staff would ensure that the "Sloppers" were ditched there and then over the lee side as there were cases of it being tipped away down basins which, of course, had been secretly pre-tapped by forward thinking sailors to ensure that nothing went to waste! And there were other tricks too - plenty of them... "Black Tot Day" in the RN was 31st July 1970 and only the RNZN continued the custom though that navy too, finally killed off the tot in 1990. "Splice the Mainbrace" is now the only occasion when rum is formally issued to the Royal Navy: ordered only by the Monarch it is issued as a formal "well done and thank you" to a ship's company for outstanding service. In the 20th/21st century such occasions would be a notable feat of arms by one of the Sovereign's warships (the bringing to surrender by the British Mediterranean Fleet of the Italian Fleet in 1943; the formal ending of the European and then Far East conflicts in 1945; the daring breakout from the River Yangtze in July 1949 of the frigate HMS AMETHYST, are all examples); and aboard the Royal Yacht BRITANNIA this order, Splice the Mainbrace, would invariably accompany the signal received onboard from the Queen after she had completed a spell of Royal Duty onboard. More recently, the birth of Prince George in the summer of 2013 required Her Majesty's Ships and Establishments at home and abroad to Splice the Mainbrace!

SUNDAY ROUNDS:  A routine tour of inspection of the accommodation areas of a ship carried out to ensure correct and safe stowage of equipment especially with regards firefighting and flooding  (always potential hazards in any ship), and hygiene and cleanliness of living and cooking spaces.  In the days when warships were heavily armed with conventional guns and powered by manpower intensive steam boilers and main engines, major warships housed well over 1000 men so there was penty of scope for these Rounds to check that all was "ship shape and Bristol fashion".  Sunday Rounds were the big inspection of accommodation spaces of the week and as always with the Senior Service, were heavily laced with tradition and ceremonial.  Best uniforms were worn, formal language used and the Rounds Party (those who made up the team) was composed of many: it would often snake back for upwards of 50 yards in a big ship and frequently the ship's cat or dog - also kitted out in finest uniform - would be there as Tail End Charlie.  And sometimes a parrot or other ship's favourite would be invited to join the Rounds Party too...   Rounds were also - and remain - an opportunity for the senior management of the ship to get around some of the more inaccessable compartments of their vessel and to re-acquaint themselves with some of their more retiring inhabitants!  At Christmas when at sea the Royal Navy traditionally allows the youngest man aboard to dress up in the captain's  uniform, and so attired he joins the Rounds Party on its tour of the messdecks where each - until 1970 -  would be greeted with a tot of rum: sadly the tot in the RN was discontinued in 1970 but alcohol (in moderation you understand) still seems to find its way into these celebrations!  Sunday Rounds these days are virtually a thing of the past, Sunday being seen as a day for relaxation if the ship's programme permits.  But evening rounds are very much a necessary part of the routine when a  ship is at sea, usually conducted by the second-in-command or a deputy, and invariably landing up in the Captain's cabin with the customary report "Evening Rounds correct, Sir".  To which the Captain customarily replies " Thank you, do join me in a glass...!"

DEFAULTERS:  The disciplinary hearing of those adjudged to need to answer for their actions!  Those who were thought to have transgressed were brought along as "a Defaulter" to hear their case considered by "a superior in authority".  The first hearing could well be conducted by a junior Officer of the Day (OOD), a  one striper or perhaps two.  Behind the Defaulters' Table would be the OOD together with a member of the Regulating Branch (the ship's police force), and the defendant's Divisional Officer, a senior rating or junior officer who would be there to defend his man, to see fair play and to offer advice as to how he performs his work, his disciplinary record and so on.  On the other side of the table would be the Defaulter (cap off); and inevitably in the background would be further defaulters awaiting their summons to step up to the Table and be heard.  If there was clearly nothing (much) wrong then "Nothing to answer, case dismissed" would follow; not so encouraging for the defendant would be "I find there is a case to answer, XO's report".  And so the defendant would then appear again at a later time at the Defaulters' Table to face a larger and more imposing "court": more senior people and more of them!  And so on up the chain of command until the defaulter would find himself at the ultimate court of authority onboard, "Captain's Defaulters".  Not only was the Old Man himself there, scowling and looking fierce, but he was now supported by his most senior advisers onboard, whilst lurking in the background behind the Captain and awaiting their turn to give evidence for forthcoming defaulters, would be yet more senior advisers: it was a daunting sight indeed for the deafulter!  Seen here with his cap off and with all listening to the Master-at-Arms whilst the charge is read out, our defaulter is hoping his divisional officer is going to come up with some really good guff that will manage to flannel the Captain and lead to a reduced sentence - better still - a dismissed case!  Meanwhile, waiting in a queue behind our man in the dock is a stream of fellow reprobates who are listening closely to try and judge the Captain's mood, to the sentences he is dishing out.  And there again is the ship's cat at the back of the line ("did fail to catch roaming rodents, they being clearly identified as enemies of Her Majesty's Ship.... ?).  And as we may now well be at sea, the ship will be rolling and pitching: everyone is swaying backwards and forwards, there's the sound of crashing plates falling in the galley down below; the defaulter may be allowed to stand at ease to prevent him falling, too, into the Master-at-Arms' arms!   There were always incidences of a really good story winning over the Captain - indeed a cleverly concocted yarn with lengthy and contrived thrills and spills such as the Old Man himself could remember from the long gone days of his careless youth - would definitely invite lenient sentencing, and a wry grin from all in authority who would recognise - and positively welcome - a spirited defence when they saw it.   "Defaulters" was not unmitigated seriousness....!

”Growing with the Fleet” was always Gieves’ proud  and achieved  boast and to those in the post WWII Royal Navy who remember the impeccably managed No 2, The Hard, Portsmouth, just outside the main dockyard gates, the following verse merely reinforces the legendary importance that Gieves achieved within the Royal Navy:

"Some talk of Alexander,  And some of Dudley Pound;  Of Cunningham and Harwood  - And other names renowned.  But the man who runs the Navy,  And keeps the Fleet afloat,  Is Gieve  of     Piccadilly  And Bond Street, too, please note!” These silhouettes are produced by generous permission of the late Mr Robert Gieve of Gieves and Hawkes, Savile Row, London and are available either as single prints or as a set of three.