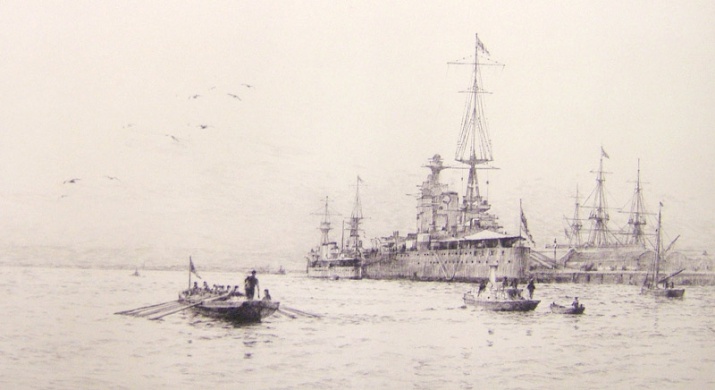 A little known etching seldom sighted, this is a fascinating picture for it is done by one fine artist of the funeral procession of another.

WL Wyllie had died of a stroke on Easter Monday, 6 April 1931. His coffin was bought back to his native Portsmouth where it lay in his studio, we are told, beneath a huge panoramic canvas of the battle of Jutland on which he had recently started work. King George V and Queen Mary sent a message of sympathy and after a funeral service at Portsmouth Cathedral, WL’s coffin was driven to Point slipway where a large crowd of well wishers had gathered to pay their respects. The Home Fleet flagship, the battleship HMS NELSON who was in Portsmouth, had sent a cutter into which the bearers  made up of his sons and friends from Point  lifted the coffin, placing it carefully in the stern sheets. Manned by his own Sea Scouts on which he had for so long lavished huge affection and care, the cutter was pulled up harbour, ships alongside paying their respects as the little flotilla passed.

Here we see the cutter passing HMS VICTORY whose ensign at the gaff is half masted; and out on the sea wall, bows north, is HMS NELSON, ensign similarly half masted (though by custom the admiral’s George Cross at the mainmast remains close up). This was a huge honour in itself, indicative of the respect in which WL was held by the Senior Service. The honour was further embellished by the Home Fleet flagship who turned out the Officer of the Day and a piping party to pipe The Still on their bosun’s calls as Wyllie’s coffin passed: the piping party can be made out standing atop B gun 16 inch gun turret forrard of the huge ship’s massive armoured bridge. Ahead of NELSON lies another battleship, HMS WARSPITE who paid similar marks of respect.

And so the coffin was borne to St Mary’s church which stands in the grounds of Portchester Castle: here he was laid to rest alongside his daughter Eva. The service of committal ended with the District Scout Commissioner reading Tennyson’s poem “Crossing the Bar”.

Lieutenant Commander Rowland Langmaid was born in Vancouver in 1897; after a career in the Royal Navy he took up art full time and was the official war artist to the C-in-C Mediterranean Fleet throughout WWII. He died in Malaga in 1956.