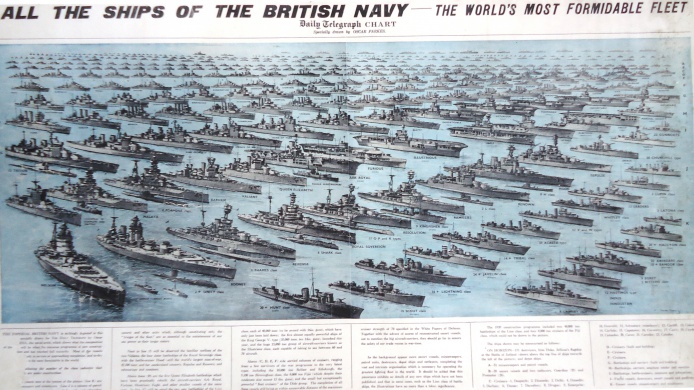 From £95 (mounted/matted) depending upon size

HMS ROYAL OAK is conspicuous by her absence from the ranks of capital ships (she was sunk in October 1939) but HOOD, ARK ROYAL and REPULSE who were to be lost in May, November and December 1941, are still there.  So are LION, TEMERAIRE, JELLICOE and BEATTY, the 40,000 ton 16 inch projected follow on class from the KGVs of four battleships, the construction of which was abandoned in 1940. CONQUEROR and THUNDERER, the other two, were never laid down. Also missing from the ranks here are the carriers COURAGEOUS and GLORIOUS who had been lost in September 1939 and June 1940 respectively.

Its a fine piece of "re-assuring" artwork and makes for a rewarding and interesting picture!   It can be enlarged as required.