The Royal Yacht BRITANNIA WITH THE MEDITERRANEAN FLEET, 2ND MAY 1954 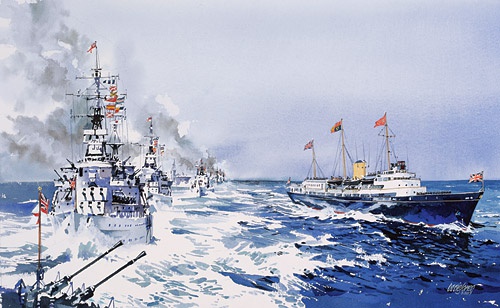 HM Yacht BRITANNIA was built at John Brown’s Shipyard on the Clyde and launched by Her Majesty The Queen in 1953. Some 11 months later on 14th April 1954 with Their Royal Highnesses Prince Charles and Princess Anne embarked, BRITANNIA (A/Captain J S Dalglish RN) slipped from Portsmouth and headed for the Mediterranean where she was to meet HM The Queen who was then homeward bound from her Commonwealth Tour in the Shaw Savill liner SS GOTHIC (Captain D Aitchison).

Charged with this important rendezvous and subsequent escorting of the Sovereign whilst she was in the Mediterranean was the Commander-in-Chief Mediterranean Fleet, by happy coincidence Admiral Lord Mountbatten. Personally involved to a high degree in the arrangements for this historic first meeting with the new Royal Yacht, the C-in-C named the meticulously planned operation order The Precise Manoeuvre’. The fleet was drilled relentlessly in rehearsals, captains were exhorted to err on the side of showmanship and manoeuvre within (rather than outside) prescribed distances, and above, rather than below, ordered stationing speeds: nothing - but nothing - was left to chance. At 25 knots and with cruisers stationed at only 2 cables (400 yards) apart and smaller ships at 300 yards, there was simply no room for error. Perfect timing, from firing of gun salutes to executing wheel overs and speed changes, was critical to the panache of the occasion and the avoidance of collision!

To quote from Precise Manoeuvre: “The Fleet Escort, led by the C-in-C in GLASGOW will approach HMY BRITANNIA and her Close Escort in two columns at high speed from ahead. The two columns will wheel in succession and pass the Royal Yacht close aboard on either side. The cruiser line will pass to starboard, then the destroyer line to port and finally HMS EAGLE to starboard. Guards and bands will be paraded by each big ship and as each ship passes the BRITANNIA the massed ships’ companies will give three cheers for Her Majesty”.

Vice Admiral E M C Abel Smith, Flag Officer Royal Yachts, embarked with The Queen remembers coming out on deck at the end of morning church to see the sight of the Mediterranean Fleet led by Lord Mountbatten thundering over the horizon at 25 knots. This painting, specially commissioned by Maritime Prints & Originals, shows the scene as the two columns, having closed at high speed from ahead, fired their Royal gun salutes and wheeled inwards, start their steam past in two lines. Running up the Yacht’s side at an ordered distance abeam of only 100 yards was remembered as “memorable and dangerous” with ships having to use up to 25 degrees of wheel to stay in station and on course in the tumbling and turbulent wake of the ship ahead. Things weren’t exactly flat calm aboard BRITANNIA either as she was rolled and buffeted in the washes of her very fast, outrageously close, escorts!

Once the port column of 9 ships had completed their fast, close pass up the Yacht’s port side, EAGLE executed her own steampast to starboard before taking station 1 mile ahead of BRITANNIA. GLASGOW then closed the Yacht and transferred Admiral Mountbatten across to her by jackstay as The Queen, her escort now in station around her, headed for a huge welcome at Grand Harbour, Malta GC.