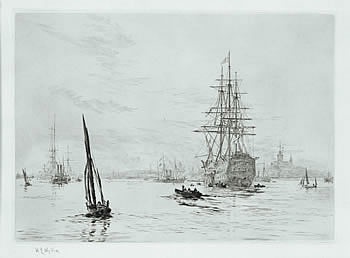 Another beautifully executed etching by Wyllie of HMS VICTORY whilst she was still afloat in Portsmouth  she wasn’t moved into the dockyard until December 1921 and her present dry dock until 12 January 1922. Ahead of her in this etching is a rare bird, however: HM Yacht ALBERTA a very attractive twin funnelled paddler commissioned in 1863 for Queen Victoria’s short haul’ voyages such as from Portsmouth to Osborne Castle on the Isle of Wight.
It appears as if the Standard at ALBERTA’s mainmast is half masted  and it was in ALBERTA that Queen Victoria’s coffin was conveyed from Osborne, where she had died on 22nd January 1901, to Portsmouth on 1st February. But VICTORY’s colours are clearly not half masted and for an event of such importance it is unlikely that the King’s Harbourmaster (he had changed his title eight days earlier when King had succeeded Queen) would have permitted routine harbour movements to continue such as the sailing of what appears to be a King Edward VII Class battleship over to the left of the etching. But ALBERTA, carrying Queen Victoria’s coffin, had spent the night of Friday 1st February berthed up harbour at Clarence Yard; and she had then come down harbour (as she is here) to berth at South Railway Jetty (behind VICTORY to the right) from where the coffin left by Royal Train for London What exactly is the occasion Wyllie is portraying?

It was, incidentally, during the voyage over from Osborne to Portsmouth when VICTORIA & ALBERT II was accompanying ALBERTA carrying the Queen’s coffin, that the King observed V&A’s Royal Standard was half masted. Declaring that “The King of England lives” His Majesty forthwith commanded that the Standard be raised, a precedent that has remained unchanged although we do know from photographic evidence and a pencil and grey wash painting by Wyllie of ALBERTA entering Portsmouth with the Queen’s coffin, that the Yacht was permitted to wear Her Majesty’s Standard at half mast.